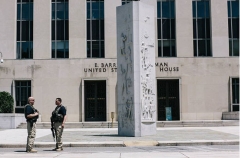 The latest annual report from the Justice Department to Congress on the disposition of FISA requests was delivered on April 28, 2016. Signed by then-Assistant Attorney General Peter J. Kadzik, it covers calendar year 2015.

“[T]his report provides information regarding all applications made by the government during calendar year 2015 for authority to conduct electronic surveillance for foreign intelligence purposes under the Act,” Kadzik says in the first paragraph of the report.

This annual report—and those going back to 1996—are available at DOJ’s online Freedom of Information Act library.

From 2010 through 2015, the government submitted a total of 9,400 applications to the Foreign Intelligence Surveillance Court seeking the authority to conduct electronic surveillance.

Of those 9400, the court approved 9,391 and the government withdrew 9. The court also modified 217 of those it approved.

In a July 29, 2013 letter to then-Senate Judiciary Chairman Patrick Leahy (D.-Vt.), Judge Reggie B. Walton, then the court’s presiding judge, explained why the court approved such a high rate of government applications to conduct electronic surveillance under FISA.

“[A] proposed application must be submitted by the government no later than seven days before the government seeks to have the matter entertained,” Walton wrote.

“Upon the court’s receipt of a proposed application for an order under FISA,” the judge said, “a member of the court’s legal staff reviews the application and evaluates whether it meets the legal requirements under the statute. As part of this evaluation, a court attorney will often have one or more telephone conversations with the government to seek additional information and/or raise concerns about the application.”

The court attorney “then prepares a written analysis of the application for the duty judge.”

“The judge typically makes a preliminary determination at that time about what course of action to take,” wrote Walton.

“A staff attorney will then relay the judge’s inclination to the government, and the government will typically proceed by providing additional information, or submitting a final application (sometimes with amendments, at the government’s election) for the court’s ruling…”

“In some cases,” wrote Walton, “the government may decide not to submit a final application, or to withdraw one that has been submitted, after learning that the judge does not intend to approve it.

“The annual statistics provided to Congress by the Attorney General pursuant to 50 USC §§ 1807 and 1862(b)—frequently cited in press reports as a suggestion that the court’s approval rate of applications is over 99 percent—reflect only the number of final applications submitted to and acted on by the court,” wrote Walton.

The court has eleven judges appointed by the chief justice of the Supreme Court.

“I addition to the judges, the FISC has a staff of five full-time legal advisors with expertise in foreign intelligence issues,” said CRS. “These legal advisers are said to conduct a thorough ‘vetting’ of all applications before the government presents them formally to the FISC judges.

“In light of the sensitive nature of its docket,” said CRS, “the FISA courts operate largely in secret and in a non-adversarial fashion.”

In 2009, the last year in which the court denied a final electronic surveillance application, the Justice Department submitted 1,329 applications for electronics surveillance, according to the annual report. The court approved 1,320, while modifying 14 that it approved. The government withdrew 8.

The report for 2003 notes that in two of the four cases that were denied that year, the government eventually got approval for surveillance.