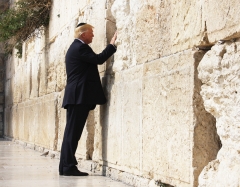 (CNSNews.com) – Images of President Trump touching the ancient stones of the Western Wall in Jerusalem will send a strong signal to the Palestinians and their Muslim allies who have used U.N. forums to contest Jewish claims and heritage at the location of the biblical Temples.

Trump on Monday became the first sitting president to visit the wall, where he stood, placing his hands on the hewn stone, and slipped a note into a crack in line with Jewish custom.

“I was deeply moved by my visit today to the Western Wall,” Trump said afterwards. “Words fail to capture the experience. It will leave an impression on me forever.”

He was accompanied during the visit by the chief rabbi of the Western Wall, Shmuel Rabinowitz. Not present, despite a reported Israeli request, was Prime Minister Binyamin Netanyahu, a reflection of the great sensitivity surrounding the site.

The Temple Mount is the most revered site in Judaism, but although the area has been under Israeli sovereignty since 1967 the nearest point where observant Jews are able to pray openly is the Western Wall, a remnant of a retaining wall on the western flank of the hilltop platform.

The hilltop itself is home to the al-Aqsa mosque, built after the 7th century Islamic invasion and regarded by Muslims as their third-holiest site, after the Ka’aba in Mecca and the Mohammed mosque in Medina.

The international community, including the United States, does not recognize Israeli sovereignty over the area, or Israel’s claim to Jerusalem as its “indivisible and eternal” capital.

The Palestinians want at least eastern Jerusalem as the capital of a future independent state, and Islamic theology calls for the Temple Mount – which Muslims call al-Haram al-Sharif (“Noble Sanctuary”) – to be in Muslim hands, exclusively and always.

These include the site of the temple first built by King Solomon some 3,000 years ago, as recounted in the Bible (2 Chronicles 3), and the rebuilt one – the one in which Jesus taught – which was finally razed by the Romans in 70 AD.

The Palestinians also contest Jewish rights to the traditional burial places of the biblical patriarchs and matriarchs in Hebron and Bethlehem.

In 2011, the U.N. Educational, Scientific, and Cultural Organization became the first U.N. agency to admit the “state of Palestine,” and in recent years Arab states have introduced resolutions at UNESCO rejecting any Jewish connection to Judaism’s most important sites.

Some of the texts have referred to the Temple Mount and the Western Wall only by their Islamic names, and all have attacked Israeli sovereignty in Jerusalem.

The Trump administration has navigated the tricky waters warily.

According to Israeli media accounts, U.S. diplomats involved in preparing for Trump’s visit turned down a request for Netanyahu to accompany the president to the wall, citing the sovereignty issue.

On the same day, however, U.S. Ambassador to the U.N. Nikki Haley sided with Israel on the matter.

“I don’t know what the policy of the administration is,” she told CBN television, “but I believe the Western Wall is part of Israel and I think that that is how, you know, we’ve always seen it and that’s how we should pursue it.”

While campaigning for the presidency, Trump undertook – as have some of his predecessors – to move the U.S. embassy from Tel Aviv to Jerusalem, a step that would lend enormous weight to Israel’s claims to its capital.

Such a move could, however, alienate the very Arab and Islamic leaders Trump wants to rally in a concerted effort against what in his speech in Riyadh Sunday he called “Islamic terror.”

Many Israelis hoped Trump would announce the embassy move during his current visit, but U.S. officials ahead of the trip indicated that would not happen.

Relocating the embassy is a requirement of U.S. law, enacted in 1995, which called for the move by May 1999 at the latest, but also contained “national security” waiver provisions that have been invoked by presidents at six-monthly intervals ever since.

The current waiver expires on June 1, so Trump has a little over one week to renew it – or set the embassy move in motion.