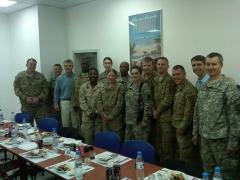 (CNSNews.com) - Rep. Scott Rigell (R.-Va.)--who served six years in the Marine Corps Reserves, sits on the House Armed Services Committee, and represents the congressional district with the largest concentration of military personnel of any in the nation--said today he is calling on House Speaker John Boehner to call the House back into session to prevent President Barack Obama from usurping Congress’s constitutional authority to authorize—or not authorize—the use of military force in Syria.

“He should be calling the House back right now,” Rigell said of Boehner. “I will be clear on this.”

Rigell sent a letter to President Obama today—co-signed by a bipartisan group of “over 100” House members--reminding the president that it is “clearly delineated” in the Constitution that the president must seek congressional authorization before using military force unless the use of force is needed to protect the United States from an attack.

“While the Founders wisely gave the Office of the President the authority to act in emergencies, they foresaw the need to ensure public debate—and the active engagement of Congress—prior to committing U.S. military assets,” Rigell wrote. “Engaging our military in Syria when no direct threat to the United States exists and without prior congressional authorization would violate the separation of powers that is clearly delineated in the Constitution.”

Obama expressed precisely this view of the constitutional war power when asked about the matter by the Boston Globe in an interview that was published on Dec. 20, 2007.

“The president does not have power under the Constitution to unilaterally authorize a military attack in a situation that does not involve stopping an actual or imminent threat to the nation," Obama said at that time.

The draft language that the Constitutional Convention discussed on Aug. 17, 1787, according to notes that were taken that day by James Madison, gave Congress the power to “make war.” Madison himself and Elbridge Gerry of Massachusetts "moved to insert 'declare,' striking out 'make' war; leaving to the Executive the power to repel sudden attacks." The convention accepted this change and the argument for it.

George Washington, who presided over the Constitutional Constitution, acted on this understanding of the war power when he was president. In 1793, Washington wrote: "The Constitution vests the power of declaring war with Congress, therefore no offensive expedition of importance can be undertaken until after they shall have deliberated upon the subject, and authorized such a measure."

Rigell said George Washington's understanding of the war power is reflected in the letter he and his colleagues have sent to the president.

“Prior to engaging U.S. forces, he must call us into joint session, make the case to the American people via their elected representatives—House and Senate--and seek and obtain statutory authority," said Rigell, "or if he is not successful in seeking or receiving that statutory authority, then he would be prohibited from taking action in Syria. It’s really that simple."

Rigell said that if Obama does not do this he personally believes Boehner should call the House back into session immediately.

“Look, I don’t think it is in dispute that chemical weapons have been used," said Rigell. "I am quite sure that tragedy, as it unfolded, it is going to be clear that chemical weapons were used.  And this is a tragic loss of life, and I think Secretary [of State John] Kerry was correct in describing it as a moral obscenity.

"Now, that said, the question is: What then, if anything, we should do here? And the president, in my view, has not been clear," said Rigell. "It is not clear what we are trying to achieve, or how it would be achieved. And, so, if that were brought to the floor for a vote, whether or not to initiate military action, I’d vote no. But I would also keep an open mind should the president follow the correct steps—and that is to call us into joint session and walk us through both what the facts are and what his logic is.

"I would be open to the argument," Rigell said. "But as the facts are presented today, I would vote no.”

Rigell said he believed there were only a “handful” of members of Congress on the Hill at this time--and that, in fact, while he has been up their working on this issue he had not run into anybody.

CNSNews.com asked Rigell what he would tell Speaker Boehner if he spoke to him right now.

Rigell said: “Mr. Speaker, based on what the president is saying right now, that I do think we need to get ahead of this. I think our conference needs to be bold and united—not only our conference, but so many members of the Democratic minority. It’s so important on this matter that it is not presented as a partisan matter. It is not. And the tone of our letter, though firm, is respectful. But it is unambiguous.

“I’d ask the speaker, look, get behind something,” said Rigell. ‘If not this letter, then something."

“I wouldn’t have said this a week ago," he said, "but I will say it now, and here with you, that I really do believe that given how the clock is ticking, based on what the administration is saying ... I think we’re at the point now of saying the House of Representatives should be called back into session because it is clear the president is moving in this direction.”

“That’s my view as one member of the House of Representatives,” said Rigell. “But we are at that point.”