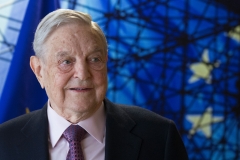 The charge by Terry McAuliffe’s supporters that his opponent, Glenn Youngkin, is anti-Semitic because he criticized George Soros is preposterous.

No person is beyond criticism simply because he is a member of a minority community. Mr. Soros actively and openly engages in politics and in influencing state and local governments and is, therefore, a legitimate object of criticism, especially concerning the left-wing policies he’s tried to force on America through his massive underwritings. Thus, this accusation is just another dishonest attempt to win an election by playing the "anti-Semitism card." It is specious chutzpah.

Furthermore, those who point to Soros do so not because he is Jewish but because he is Soros, Soros being the most high- profile and effective opponent today of American traditional values. As is well-documented, he is by far the primary funder of radical leftist candidates and groups vowing to transform America into a transnational entity. Most people don’t even know the ethnic background of George Soros.

Most ironic and disingenuous is casting Mr. Soros as a symbol of Jewish peoplehood when, in fact, Mr. Soros has spent a lifetime working against Israel’s defense and Jewish survival and needs. He has been proud of his disassociation from the Jewish community. To make him into a Jewish martyr is ludicrous inasmuch as he has spent a lifetime distancing himself from anything identifiably Jewish. Those on the left who too often abandon Israel and never care about the rampant anti-Semitism within their own political left are showing themselves to be hypocrites and putting victory at all costs above truth.