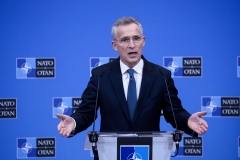 NATO Secretary General Jens Stoltenberg speaks during a press conference on the second day of a NATO Defence Ministers meeting at the NATO headquarters in Brussels, on Feb. 17, 2022. (Photo credit: KENZO TRIBOUILLARD/AFP via Getty Images)

While geopolitical commentators are fixated on Russia’s border with Ukraine, a more interesting development is slowly boiling underneath the surface of the Russo-Ukrainian conflict that could potentially reorder international relations — namely, the death of the North Atlantic Treaty Organization (NATO).

Founded in 1949, NATO began with only twelve member nations. Presently, NATO counts on thirty member nations, with national security elites in the Anglo-American sphere wanting to bring Georgia and Ukraine into the fold. In both countries’ cases, NATO membership is in limbo.

Despite calls for expanding NATO, the military alliances undergirding the organization could be in for an unexpected shake-up. Ever since French president Emmanuel Macron declared in 2019 that NATO was experiencing “brain death,” a new reality has gradually dawned upon the European continent.

Additionally, the Russo-Ukrainian conflict is currently exposing contradictions within Europe regarding security and economic priorities. Countries such as Italy have taken more balanced stances toward Russia, stressing the importance of dialogue while maintaining robust trade ties. Croatian president Zoran Milanović recently announced that Croatia will withdraw all its NATO forces from eastern Europe if a hot conflict between Ukraine and Russia breaks out. Germany itself has refused to send arms to Ukraine amid alleged threats of an imminent Russian invasion. Other NATO members like Hungary believe that Russia’s security concerns are reasonable and are aiming to boost natural gas commerce with the nation.

In France, populist presidential candidates like Eric Zemmour have explicitly called for a rapprochement between Russia and France. This includes lifting sanctions on Russia and moving away from American-dominated institutions such as NATO.

Zemmour is no fan of American hegemony. He has previously suggested that the American and British 1944 landing in Normandy opened the door for France to be turned into a client state. Zemmour’s skepticism toward American influence in France has continued well into his presidential campaign, during which he has called on France to stop “being a tool of the United States.”

Zemmour maintains that Washington tries to play European countries off against Russia, proclaiming, “The U.S. is trying to divide Russia from France and Germany, and every time they get closer to each other, the Americans find a way to divide them.” In many respects, the United States is the geopolitical successor to the United Kingdom when it comes to the divide-and-rule tactics it pursues to ensure that a Berlin-Paris-Moscow rapprochement never occurs on the European continent.

Macron himself is not the most enthusiastic supporter of a U.S.-led order but he couches his opposition in centrist terms. Instead, Macron wants to copy and paste the American-dominated rules-based international order but give it a Eurocrat flavor.

In fairness, Macron acknowledges the need for dialogue between Russia and France, a kind of dialogue that other Western powers are not keen on having. Most “liberal democracies” are thoroughly consumed by moral righteousness and believe that any countries which deviate from their political norms are not worthy of dialogue and must be internationally isolated.

French concerns about the U.S.’ influence reflect a vestigial legacy of former president Charles de Gaulle’s foreign policy outlook. During the former French military officer’s time in office, de Gaulle made it a point to maintain French equidistance from the Cold War behemoths — the Soviet Union and the United States — so that France could chart its own path. De Gaulle’s decision to remove France from NATO’s integrated military command was among the boldest moves he made to distance the country from American influence.

In addition to the problems created by the Russia question, NATO faces internal problems among its member states. For example, Turkey and Greece — both members of NATO — got into a tiff over disputed energy claims in the eastern Mediterranean in 2020. France considered sending warships and imposing sanctions on Turkey if it continued escalating with Greece at the time. Cooler heads eventually prevailed.

Even with regard to China, which many in the D.C. blob are beginning to regard as America’s primary strategic challenge, NATO members are not on the same page. For example, in the summer of 2021, Hungary blocked the European Union’s statement criticizing China’s national security law in Hong Kong and has opened itself up to Chinese investment. Poland, a key ally in D.C.’s saber-rattling against Russia, did not participate in the diplomatic boycott of the Winter Olympics and had President Andrzej Duda meet with Chinese leader Xi Jinping.

Changing realities on both the domestic and international fronts could make a substantial change in European foreign policy a not-so-farfetched possibility. After all, the U.S.’ descent into woke insanity, coupled with its unsustainable economic policies, will put it on the path to socioeconomic instability, making it a less attractive partner to align with. With so many problems at home, the U.S. will have trouble dedicating resources toward its international mischief.

The potential unraveling of NATO could mark the beginning of the end of American geopolitical supremacy and usher in a new era of heightened competition across the globe, with countries holding distinct visions for trade, foreign policy, and broader statecraft, something long overdue. The U.S.’ vast military footprint has done scant little to uphold middle American interests, but it has fattened the pockets of the defense industry and kept many self-proclaimed foreign policy “experts” employed at D.C. think tanks.

Moreover, NATO’s disintegration would incentivize countries to pursue more independent foreign policies and start taking defense matters into their own hands, like any self-respecting nation that believes in sovereignty should.