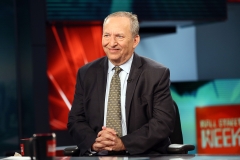 combined with December’s relief, approaches a quarter of the size of the entire U.S. economy. Former Treasury Secretary Larry Summers, publicly voicing concerns that other Democratic economists express privately, has warned it might “overheat” economic activity by sparking excessive inflation.

Economists less worried about inflation simply question the need for that much relief. Overall personal income actually remains higher than before the pandemic, notwithstanding interruptions in economic activity. Much of earlier relief checks went into Americans’ savings accounts.

Researchers at the University of Pennsylvania’s Wharton School of Business say Biden’s proposed spending will hurt our economy in the long run by exploding the national debt, which already is bigger than our entire economy.

“The existence of the debt saps the rest of the economy,” Wharton analyst Efraim Berkovich said. “When the government is running budget deficits, the money that could have gone to productive investment is redirected.” “Effectively, what we’re doing is taking money from [some] people and giving it to other people for consumption purposes,” he continued; “longer-term, you’re taking away from the capital that we need to grow our economy in the future.”

Other economists also say the economy will shrink due to Biden’s plan. The Congressional Budget Office found that “the additional public debt resulting from the Biden plan would decrease” the size of our economy in the long term.

Biden’s plan showers state and local governments with unnecessary money that is not needed to cope with the pandemic, and could lead to government waste. As CNN’s Harwood notes, “The $350 billion in state and local government aid far exceeds estimates of their revenue loss from the pandemic.” Local tax revenue actually rose in 2020, as did state tax revenue in 21 states. Legislators are already planning tax increases in several states with rising revenue, such as California, New York, and Illinois.

Biden’s plan is not needed for the economy to grow, even in the short run. The economy is already growing, after increasing at a record rate in the third quarter of 2020. And while the economy temporarily shrank at the peak of the coronavirus pandemic, it still fared better than any other major economy in the OECD than Japan, with America’s economy shrinking at less than half the rate of England’s.

Pandemics do not require huge increases in government spending. There was no relief package after the great influenza epidemic of 1918-19, which killed far more people than COVID-19 — even though the epidemic temporarily hammered our economy. Instead, government spending was slashed. The recession that followed the influenza outbreak came to a quick end, and the economy grew vigorously.

James Paulsen, chief investment strategist at The Leuthold Group, says that Biden’s plan could spur strong inflation and force the government to tighten monetary policy at the expense of the economy.