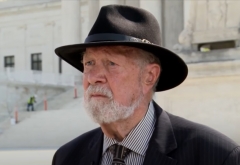 Pro-life leaders commemorated the Monday passing of Joe Scheidler, founder of Pro-Life Action League (PLAL) with a decades-long legacy in the movement.

The “Godfather of Pro-Life Activism," who died of pneumonia at age 93, started fighting abortion in 1973, shortly following Roe v. Wade, according to a statement issued by PLAL.

“My father’s proudest accomplishment was the pro-life work of those he inspired to take an active role in the fight against abortion, the greatest injustice of our time,” said Eric Scheidler, the luminary's oldest son and PLAL executive director. “For years, people have been telling me about the talk or protest where they met my father, and how his words and example prompted them to do more than just talk, but to take responsibility for addressing the injustice.”

He noted that his father was inspired by racial justice activism, stating that it was fitting for the PLAL founder to pass on the day honoring King.

Scheidler served as defendant in National Organization for Women v. Scheidler, the longest case in the history of U.S. federal court, coming three times before the Supreme Court to oppose the weaponization of the Racketeer Influenced and Corrupt Organizations Act against pro-life protesters and winning the latter two cases 8-1 and 8-0.

Scheidler "was a personal friend to Paul and me for so many years," said American Life League President Judie Brown in a press release obtained by CNSNews. "It all started in 1977 when Joe and Paul worked together giving speeches—Joe on abortion and pro-life activism, and Paul on pro-life political action. From there the relationship grew, and in 1980 when Joe started PLAL, he sought out Paul’s help with fundraising for his fledgling organization—an organization that would become the driving force behind peaceful pro-life action all across this nation, and frankly, the world."

On a personal level, our children will forever remember him as the tall guy in a white suit who towered over everyone else at a Papal Mass celebrated by St. John Paul II on the steps of St. Peter’s Basilica at the Vatican. He guided us to our seats near the front of the Mass as though he were a papal usher. And he also taught our children how to dig for Roman coins—coins he had already planted prior to their arrival—near the ruins of the Baths of Caracalla in Rome. He was that kind of a man—a friend and fellow warrior forever committed to ending the slaughter of the babies.

Joe, we will miss you, but we know that you are now directing the angels in the art of activism. Your dedication will live on for many years—in your legacy, in our memories, and in the memories of all those whose lives were touched, changed, or saved because you loved them.

Joe, we love you, and we miss you. We invite all those who read this to join us in praying for the happy repose of the soul of the pro-life movement’s gentle giant, Joe Scheidler.

Tom Brejcha, co-founder, president, and chief counsel of the Thomas More Society, a conservative law firm, also commented on the passing of Scheidler, who also co-founded his group.

"Joe advocated for life by both his word and his deeds," Brejcha said in a press release obtained by CNSNews. "He would bear prayerful witness as well as provide meaningfully sympathetic and compassionate 'sidewalk counseling' outside of abortion facilities, helping to save the lives of countless infants and inspiring so many others to do likewise all over this country as well as abroad. Joe's 1985 book, "Closed: 99 Ways to Stop Abortion," was a primer for peaceful yet profound activism designed to combat the violence of abortion, which he bluntly condemned as a grave evil."

"We rejoice in the truth that Joe so fully deserved to hear these words, 'Well done, good and faithful servant.'”