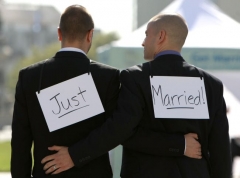 A book that calls for the Catholic Church to implement an official blessing for homosexual couples was commissioned by the Austrian bishops' conference and, as the essays in the book make clear, views homosexuality as normal, reported The Catholic World Report on May 26.

Nonetheless, the principal author of the book, Fr. Ewald Volgger, told an Austrian diocesan newspaper that he would like to see an "official benediction for homosexual couples 'as soon as possible,'" according to Catholic World Report.

"There has been a movement on the subject," said Fr. Volgger, who added that the section on homosexuality in the Catechism of the Catholic Church might need to be rewritten.

“The doctrine on homosexuality has been discussed throughout Europe in such a way that an opening up is not only debatable but can also be demanded," said Fr. Volgger, who is director of the Institute for Liturgical Studies and Sacramental Theology at the Catholic Private University of Linz.

“There are also a considerable number of bishops who would like to see a rethinking of sexual morality for the evaluation of same-sex partnerships," said Fr. Volgger.

Among the contributors to the book, The Benediciton of Same-Sex Partnerships, are several German theologians.  These prelates "have been increasingly outspoken in demanding 'discussions about an opening' towards acceptance of practiced homosexuality and the blessing of homosexual unions in the Church," reported Catholic World Report (CWR).

"Following consultations in Berlin in late 2019, the chairman of the Marriage and Family Commission of the German bishops’ conference declared that the German bishops agreed that homosexuality is a 'normal form' of human sexual identity," said the news outlet.

In 2019, CWR reported, "Archbishop Heiner Koch of Berlin stated that both hetero- and homosexuality are 'normal forms of sexual predisposition, which cannot or should not be changed with the help of a specific socialization.'"