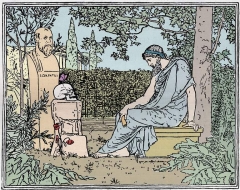 Princeton University’s Classics Department has removed its requirement for majors to learn Greek or Latin in an effort, reportedly, to address systemic racism. A four-person Equity Committee for the department claims its goal with this change is to “create opportunities for the advancement of students and (future) colleagues from historically underrepresented backgrounds within the discipline.”

The Classics Department completely eliminated its “classics” track that required proficiency in Greek or Latin, along with the requirement to take one of the languages, according to The Princeton Alumni Weekly.

The Princeton Alumni Weekly also reported that Director of Undergraduate Studies and professor of classics, Josh Billings, said these changes received new urgency after the ”events around race that occurred last summer,” presumably a reference to George Floyd’s murder and the ensuing protests and riots.

The department’s Equity Committee aims to make the tracks more accessible to students and ensure “that a broad range of perspectives and experiences inform our study of the ancient Greek and Roman past,” reported The National Review.

Greek and Latin were deemed less important by the department than diversifying the student population.

“The actions we take to promote equity and inclusion will not suffice to protect members of our community from discrimination and the effects of systemic racism – particularly anti-Black racism,” the department said in a statement on equity.

The statement claims that the Classics Department and field have been made “inhospitable” to “black and non-black scholars of color” due to racism. They go on to affirm that Black Lives Matter.

Changes were also made to the Politics Department. The department added a track called “race and identity” in which students must “take the introductory core course ‘Race and Politics in the United States’; complete three other courses from the 14 focused on race and identity; and incorporate the theme as part of the senior thesis,” according to The Princeton Alumni Weekly.

In support of this change, Professor Frances Lee, associate chair of the Politics Department, explained in The Princeton Alumni Weekly, “The politics of race underlies so much of U.S. political history,” and thus the track was necessary if students wanted to “understand politics at its core.”

Princeton University is ranked the No. 1 university in the country for its academics and its competitiveness. The acceptance rate for new student applicants is 6%.