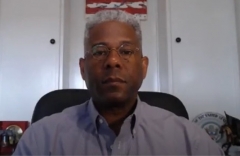 “I am alive by the grace of God,” MRC Senior Fellow Allen West declared from his hospital bed on Sunday as he recovers from a motorcycle accident the previous evening.

West is expected is be released from the hospital on Monday, but plans to take a week off before resuming normal activities, according to a Sunday post on West’s Facebook page:

“LTC West is resting and in stable condition. We anticipate him being released tomorrow and heading home. Thank you for your prayers and support. He will be taking a week off to recoup and looks forward to seeing you all again soon.”

West, along with another motorcyclist injured in the accident, suffered non-life threatening injuries Saturday when cut off by a motorist, according to the official statement posted earlier on Sunday on West’s Facebook page.

The statement reports that West suffered a concussion and fractured bones – and credits God for protecting him from losing his life in the accident:

“On his drive back from the “Free Texas Rally” in Austin, TX, Lt. Col. Allen West was involved in an accident when a car cut in front of him. He is recovering, in stable condition, and has his family with him.

“Local law enforcement reported that “an unidentified vehicle changed lanes when unsafe in front of two motorcyclists. The motorcyclist attempted to brake, and the rear motorcyclist crashed into the front motorcyclist. Both motorcyclists were transported to Baylor Scott and White in Waco to be treated for non-life threatening injuries.”

“Allen West is currently dealing with a concussion, several fractured bones, and multiple lacerations. Though these injuries are serious, Lt. Col. West stated, “I am alive by the grace of God.

“He plans to continue to be a proponent for freedom and the state of Texas, and will resume his normal calendar of activities as given clearance by his medical team.

“LTC West thanks the public for their well-wishes and outpouring of support, and continued prayers on his behalf are appreciated.”

Allen West is a retired Lieutenant Colonel in the United States Army. During his 22-year career, he served in Operation Desert Storm and Operation Iraqi Freedom, receiving many honors including a Bronze Star. In 2010, West was elected as a member of the 112th Congress representing Florida’s 22nd District. He is a Fox News contributor and author of “Guardian of the Republic: An American Ronin’s Journey to Faith, Family and Freedom” and his latest book from Brown Books Publishing Group, “Hold Texas, Hold the Nation: Victory or Death.”  Mr. West writes daily commentary on his personal website theoldschoolpatriot.com and is a Senior Fellow at the Media Research Center to support its mission to expose and neutralize liberal media bias.