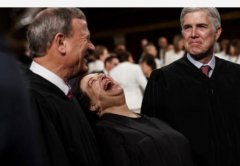 In the last session of the court, Gorsuch wrote a majority opinion for the court in Bostock vs. Clayton County, arguing that “transgender” individuals are protected from being fired by the 1964 Civil Rights Act, which prohibits discrimination based on a person’s “sex.”

Trump made the statement while announcing a new list of 20 people he will consider for a Supreme Court nomination should there be another vacancy on the court.

“Apart from matters of war and peace, the nomination of a Supreme Court justice is the most important decision an American president can make,” Trump said.

“For this reason, candidates for president owe the American people a specific list of individuals they consider for the United States Supreme Court,” said Trump.

“Four years ago, I announced my first list of highly qualified candidates and promised to fill Justice Scalia’s vacant seat from among those names,” said Trump.

“And just days after my inauguration I kept that promise when I nominated Judge Neil Gorsuch, and, as you know, he has been very spectacular,” said Trump.

In the case of Bostock v. Clayton County, Gorsuch argued that firing a man who “identifies” as a woman is sex discrimination banned under the Civil Rights Act.