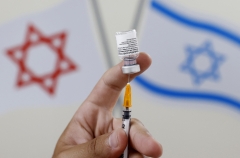 Because of a rise in COVID infections, apparently caused by the Delta variant of the coronavirus, the Israeli government announced that it is reimposing restrictions on its citizens, including wearing masks indoors and prohibiting the unvaccinated from entering some public places, such as restaurants, gyms, and synagogues, reported Reuters.

In addition, Israel plans to reinstate its "Green Passport" policy, all as part of what Prime Minister Naftali Bennett's office calls a "soft suppression" by the government. The goal is to try to limit new infections and coerce the unvaccinated to accept the shot.

"The (Green Pass) will apply to cultural and sporting events, gyms, restaurants and dining halls, conferences, tourist attractions and houses of worship," said Bennett's office on July 21, as reported by Reuters.

Israelis who have been vaccinated, who have recovered, or who test negative for COVID will be allowed to enter the public places and attend the public events.

At a press event on July 21, Prime Minister Bennett said that people who refuse to take the vaccine are endangering their fellow citizens. “Every citizen over age 12 who doesn’t have a medical reason not to must go get vaccinated,” he said.

Bennett further revealed that the Israeli government is going to start forcing the unvaccinated to pay out of pocket for COVID tests, "linking it to the government’s push to increase immunization rates," reported The Times of Israel.