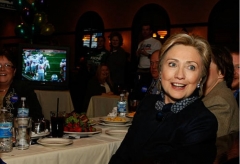 Former Secretary of State Hillary Clinton congratulated Sarah Fuller, the female place kicker for the Vanderbilt football team, after she became the first woman to play in a Power 5 conference football game—by sending a kickoff to the 35-yard line to open the second half of Vanderbilt's game against Missouri.

Clinton tweeted her own message while forwarding a tweet from SportsCenter that included a video of Fuller’s very poor kickoff in their Saturday game against Missouri.

“Thank you, Sarah, for helping to prove that women and girls belong on every playing field—quite literally,” said Hillary Clinton in hers.

Vanderbilt went on to lose to Missouri 41-0, bringing their record this season to 0-8.