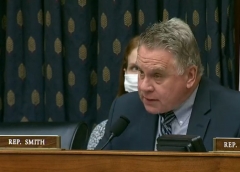 (CNSNews.com) - Rep. Chris Smith (R.-N.J.) said while questioning Secretary of State Antony Blinken in the House Foreign Affairs Committee on Monday that “reliable information” was not available to “conduct a meaningful background check" on "some, perhaps many" of the Afghan evacuees who were granted parole to come into the United States.

“Were there any gaps or weaknesses in the vetting process of Afghan evacuees, especially in light of the fact that reliable information on some, perhaps many, who got parole wasn't available to conduct a meaningful background check?” Smith asked Blinken.

“Are you concerned that the Taliban may have embedded its members as evacuees?” Smith continued.

“I visited our base at Fort Dix recently with some of the other members of Congress and our governor, and asked a number of questions,” Smith told Blinken. “But I was very concerned about the vetting--or lack thereof--and the fact that parolees--about 70 percent strong at our base at least, and we're going to go up to about 13,000--they could leave if they would like. They're free to leave. It's not clear whether or not they can return, but they are free to leave.”

Since the Taliban seized control of Afghanistan last month, two different categories of Afghan evacuees have been brought to the United States. Some are Special Immigrant Visa (SIV) holders and others are parolees.

A Congressional Research Service report published on June 21 explains the Special Immigrant Visa program as it applies to Iraqi and Afghan nationals.

“Under both classifications, a prospective Iraqi or Afghan special immigrant must submit a petition, be otherwise eligible to receive an immigrant visa; and be otherwise admissible to the United States for permanent residence as specified,” said the report.

Parolees, by contrast, are not people who have worked for or on behalf of the U.S. government in Afghanistan.

“The use of parole authority to enable designated populations to enter the United States has been particularly controversial,” the Congressional Research Service said in a report published Oct. 15, 2020.

“Immigration parole is official permission to enter and remain temporarily in the United States,” said CRS. “It does not constitute formal admission under the U.S.  immigration system. An individual granted parole (a parolee) is still considered an applicant for admission. A parolee is permitted to remain in the United States for the duration of the grant of parole, and may be granted work authorization.”

Here is the transcript of the exchange that Rep. Chris Smith and Secretary of State Antony Blinken had about Afghan evacuees where Smith said that “reliable information on some, perhaps many, who got parole wasn't available to conduct a meaningful background check:”

Rep. Chris Smith (R.-N.J.): “Thank you very much, Mr. Chairman. Mr. Secretary, you testified that you had encouraged Americans to leave the country, but you know, simultaneous with that were statements being made, including by President Biden, that Afghan's military capability was 300,000 men strong, and that they had the best training imaginable. So, at best, I would say they were misled. And you don't mention withdrawal conditions that were placed by President Trump on any exodus from Afghanistan.

“But I do have a couple of questions I'd like to ask: Did you concur and support President Biden's July 23rd phone call telling President Ghani to be untruthful about the Taliban's success?

“According to Reuters, which reviewed both the transcript and the audio, President Biden said: ‘And there's a need, whether it be true or not, there’s a need to project a different picture.’ Was that an ad-lib by President Biden, or was that lie scripted into the phone call, and if it was scripted, by who?

“Secondly, have any Americans been arrested, beaten, abducted, or killed by the Taliban or ISIS-K since we left, and do we have the capacity and the capability to know that?

“Third, were there any gaps or weaknesses in the vetting process of Afghan evacuees, especially in light of the fact that reliable information on some, perhaps many, who got parole wasn't available to conduct a meaningful background check? Are you concerned that the Taliban may have embedded its members as evacuees?

“I visited our base at Fort Dix recently with some of the other members of Congress and our governor, and asked a number of questions. But I was very concerned about the vetting--or lack thereof--and the fact that parolees--about 70 percent strong at our base at least, and we're going to go up to about 13,000--they could leave if they would like. They're free to leave. It's not clear whether or not they can return, but they are free to leave.

“And finally, one of the profoundly negative consequences outside of Afghanistan has been China and Taiwan. The state-controlled Chinese Communist Party media, including CCP-run Global Times--and I read it every day--are saturating the Taiwanese with messages to give up and surrender to Beijing because the United States will, just as it did in Afghanistan, abandon them too.

“That's what the Global Times is saying. But if you could start off with the first question, I would appreciate it, and go through them.”

Secretary of State Antony Blinken: “Thanks very much, congressman. Let me see if I can address all those questions.

“First, with regard to the phone call you cited, I'm obviously not going to comment on leaked--purportedly leaked--transcripts of phone calls. Here's what I can tell you: What the president said in that conversation with then-President Ghani is exactly what he was saying in public. And it's this: That the issue is not the capacity at that point of the Afghan government and the Afghan security forces to hold the country and to hold Kabul. It was their will and whether they had a plan to do so. And we were concerned that they were not demonstrating that will or that plan. He pressed President Ghani on the need to consolidate his forces based on the military advice from our military leaders to make sure that he could defend the places that needed defending and not overstretch those forces. And he needed to bring people together, but—.”

Smith: “I understand that, but my question is about the truthfulness—

Blinken: “To show the United States—that’s what he said–”

Smith: “--with all due respect, I only got a few minutes.”

Smith: “Tell me whether it’s true or not. Was it a real--I mean, is the transcript untrue?

Blinken: “Again, I'm not commenting on any purportedly leaked transcripts. I'm telling you what--based on my knowledge of the conversation the president said, and what he said is exactly what he said in public.

“Second, with regard to American citizens remaining behind: The ones we're in contact with, we have 500 people on a task force and teams dedicated to them to be in regular contact with him. And I have not heard from those people that concerned raised. I can't say whether there are any American citizens who we’re not in contact with or don't know of who may have been mistreated in some fashion in Afghanistan.

“Third, with regard to the background checks, and this is very important, and you're right to focus on it. You know, as you know, before Afghans are evacuated from Afghanistan reach the United States, they go to a transit country, and that's where the initial checks are done. We've surged Customs and Border Patrol. We've surged our intelligence and law enforcement capacity to do those initial checks. And then when they get to the United States, first, at a military base, those checks are continued using all of the law enforcement, intelligence, security agencies to do that so that we can make sure that we are not letting anyone into the country who could pose a threat or risk. It's exactly that balance that's so important as well in the SIV program.

“We all want to bring Afghans at risk into the United States. We also have an obligation that you rightly point out to the security of our fellow citizens.

“Finally, on China and Taiwan. As I said earlier, whatever protestations they may be making in newspapers or in their propaganda, there is nothing that China would have liked more than for us to have re-upped the war in Afghanistan and to remain bogged down for another five, 10, or 20 years. That would have been profoundly against our strategic interests and profoundly in China's strategic interests. Thank you.”