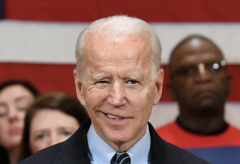 (CNSNews.com) - Joe Biden has promised that as president he will reverse a regulation put in place by the Trump Administration that allowed the Department of Homeland Security to deny entry visas or permanent resident status to immigrants who would be “public charges”—meaning they would qualify for and take government benefits such as food stamps and Medicaid.

On his campaign website, Biden has a page entitled: “The Biden Plan for Securing Our Values as a Nation of Immigrants.”

“In the first 100 days,” says this page, “a Biden Administration will: … Reverse Trump’s public charge rule, which runs counter to our values as Americans and the history of our nation. Allowing immigration officials to make an individual’s ability to receive a visa or gain permanent residency contingent on their use of government services such as SNAP benefits or Medicaid, their household income, and other discriminatory criteria undermines America’s character as land of opportunity that is open and welcoming to all, not just the wealthy.”

Implementation of Trump’s public charge rule has been interrupted by orders issued by federal judges.

Denying immigration to “public charges,” however, is actually part of U.S. statutory law.

“The Immigration and Nationality Act…renders inadmissible and therefore (1) ineligible for a visa, (2) ineligible for admission and (3) ineligible for adjustment of status, any alien who, in the opinion of the DHS (or the Departments of State (DOS) or Justice (DOJ), as applicable, is likely at any time to become a public charge,” says the regulation the Trump Administration published in August 2019.

“The statute does not define the term ‘public charge,’” says the regulation, “but in a related statute, Congress has articulated a national policy that (1) ‘aliens within the Nation’s borders not depend on public resources to meet their needs, but rather rely on their own capabilities and the resources of their families, their sponsors, and private organizations,” and (2) ‘the availability of public benefits not constitute an incentive for immigration to the United States.”

Before the Trump administration issued its rule, previous administrations had not considered aliens who took “receipt of non-cash benefits such as the Supplemental Nutrition Assistance Program (SNAP), or food stamps; Medicaid; and housing vouchers and other housing subsidies” as “public charges.”

“DHS is revising its interpretation of ‘public charge,’” said the 2019 rule, “to incorporate consideration of such benefits, and to better ensure that aliens subject to the public charge inadmissibility ground are self-sufficient, i.e., do not depend on public resources to meet their needs, but rely on their own capabilities, as well as the resources of family members, sponsors, and private organizations.

“This rule redefines the term ‘public charge’ to mean an alien who receives one or more designated public benefits for more than 12 months in the aggregate within any 36-month period (such that, for instance, receipt of two benefits in one month counts as two months,” said the regulation.

“This rule,” it said, “defines the term ‘public benefit’ to include cash benefits for income maintenance, SNAP, most forms of Medicaid, Section 8 Housing Assistance under the Housing Choice Voucher (HCV) Program, Section 8 Project-Based Rental Assistance and certain other forms of subsidized housing.”

This regulation does not apply to all immigrants. Refugees and asylees, for example, are exempt from the public charge rule.

“The rule,” says the regulation, “also does not apply to aliens whom Congress has exempted from the public charge ground of inadmissibility (such as asylees, refugees, or other vulnerable populations listed as exempt in this final rule.)”