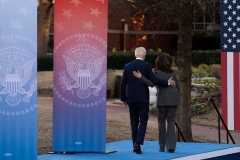 (CNSNews.com) - After hearing President Joe Biden's speech in Atlanta on Tuesday, Sen. Mitt Romney (R-Utah) went to the Senate floor to express his disappointment that Biden "said quite a number of things that simply weren’t true."

Biden, speaking in Atlanta, compared senators who oppose the Democrats' voting legislation to racists and segregationists, and while that's "sad," Romney said, it's not the worst thing Biden said:

He...accused a number of my good and principled colleagues in the Senate of having sinister, even racist inclinations. He charged that voting against his bill allies us with Bull Connor, George Wallace and Jefferson Davis. So much for unifying the country and working across the aisle.

More troubling, however, he said that the goal of some Republicans is to quote, "turn back the will of the voters into a mere suggestion." And so President Biden goes down the same tragic road taken by President Trump, casting doubt on the reliability of American elections. This is a sad, sad day. I expected more of President Biden, who came into office with the stated goal of bringing the country together.

Biden, in his divisive speech, urged the Senate to abolish the filibuster so Democrats can pass two bills that would allow Democrats to set election rules for all the states.

Biden used the Georgia election law as an example of "voter suppression."

"The votes of nearly 5 million Georgians will be up for grabs if that law holds,” the president said. “It's not just here in Georgia. Last year alone, 19 states not proposed, but enacted 34 laws attacking voting rights.

"There are nearly 400 additional bills Republican members of state legislatures tried to pass. And now, Republican legislators in several states have already announced plans to escalate the onslaught this year. Their end game, to turn the will of the voters into a mere suggestion, something states can respect or ignore," Biden said.

Romney strongly defended the institution of the Senate, at a time when American institutions have been demeaned (by President Trump, he implied):

"The judiciary was charged with racial bias. The press was called the enemy of the people. Justice and intelligence agencies were belittled. Public health agencies were dismissed. Even our election system was accused of being rigged. The United States Senate is one of our vital democratic institutions. And the power given to the minority in the Senate and the resulting requirement for political consensus are among the Senate's defining features."

Romney said if the Senate majority was allowed to pass laws without input and consent from the minority, it would benefit "the extreme wing" of either party.

"The Senate's minority empowerment has meant that America's policies inevitably tack towards the center."

Romney described how different the Senate would be without the filibuster that gives the minority a voice:

"Whenever one party replaced the other as majority, tax and spending policies would change; safety net programs would change; national security policy could change; cultural issues would careen from one extreme to the other, creating uncertainty and unpredictability, for families, for employers, and for our friends abroad.

"The need to marshal 60 votes requires compromise and middle ground," Romney continued. "It empowers the minority, and it's helped to keep us centered as a nation, fostering a stability and predictability that are essential for investments in people, in capital, in the future."

Romney noted that Democrats are now ignoring their previous impassioned defense of the filibuster: "Let us be clear that those who claim the filibuster is racist know better," he said. Romney called Biden's "absurd charge" of racism both "jarring and deeply disappointing."

"After all, I don't recall a single claim from Democrats that employing the filibuster hundreds of times over the last several years when they were in the minority was in any way racist."

Romney said Democrats are rationalizing that the Senate can't function so they can justify the abandonment of the filibuster. But, as Romney noted, the Senate has recently functioned well enough to pass bipartisan infrastructure legislation and a national defense authorization bill.

"Any time legislation is crafted and sponsored exclusively by one party, it is obviously an unserious, partisan effort," he said.