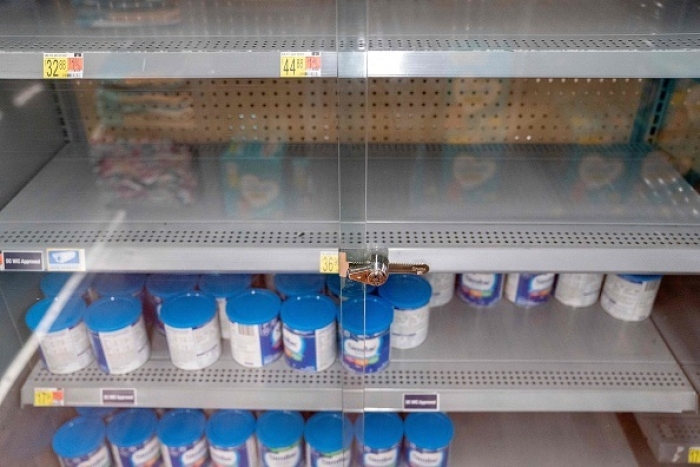 Grocery store shelves where baby formula is typically stocked are locked and nearly empty in Washington, DC, on May 11, 2022. (Photo by STEFANI REYNOLDS/AFP via Getty Images)

(CNSNews.com) - "Babies are cyring. We need to get them food," House Speaker Nancy Pelosi (D-Calif.) told ABC's "This Week" on Sunday.

She gave a vague description of what the House is doing to fix a shortage of baby formula in this country, such as "loosening" regulations on formula "so that it's easier to buy it."

"But in addition to that," Pelosi said, "Rosa DeLauro -- who has been on this case for a while, was the chair of the Agriculture Subcommittee of Appropriations when she -- now she's chair of the whole committee."

"But she has been working on this to have some funding so that we can immediately purchase, overseas -- there are four countries, Chile, Mexico, Ireland and the Netherlands, that have supply that might be available to us.

"The president is quite correct. We must do something as quickly as possible, but as safely as possible, and use caution, for these babies. But we have to move quickly to do that. And part of this is, again, the supply chain issue."

Appearing on CNN's "State of the Union," Pelosi was asked if the president should invoke the Defense Production Act to produce more baby formula.

"But the -- as the law is now, it is not possible to do that. Congresswoman Rosa DeLauro...she feels quite certain that we have to change the law in order for the Defense Production Act to be called into play. And we certainly should.

"But, in the meantime, this week, we have two bills coming up. Bobby Scott, chair of Education and Labor Committee, has a bill to loosen some of the red tape associated with how people can buy formula and other aspects of that. Fifty percent of the formula is purchased under the WIC program, and so to facilitate that, A.

"B, we then have another bill that Rosa, Madam Chair, is putting together that will allocate resources for us to be able to purchase more. And that is, there are four countries, Mexico, Chile, Ireland and the Netherlands, who have supply that we may be able to acquire immediately.

"In addition to all of this, we have to subject these companies to some scrutiny about the safety of this and how we got to a place where we have babies crying in our country because they're hungry and the shelves are bare.

"We have to fill them immediately...I say that as a mother of five, yes, grandmother of nine."

The Abbott company says it is "working closely with the U.S. Food and Drug Administration to restart operations at the Sturgis, Mich., facility," but that is not expected to happen any time soon. 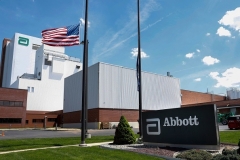 Abbott said it is making "progress on corrective actions" required by the FDA following the recall of baby formula after four infants became sick and two of them died.

Abbott said the FDA has not found any contamination of baby formula at the Sturgis plant, but inspectors did find Cronobacter bacteria in "non-product contact areas at the Sturgis facility."

Dr. Scott Gottlieb, the former FDA Commissioner and now a Pfizer board member, on Sunday blamed both the Abbott baby formula facility and the FDA for problems leading to the current baby formula shortage.

"Well, these look, were persistent problems that appear to have been handled poorly, certainly by the company. FDA didn't exert all the oversight that they could have of that facility. There were known problems with that facility going back many years. There were findings on previous inspections," Gottlieb told CBS's "Face the Nation."

"The agency had a 34-page whistle-blower report in hand making pretty serious allegations that there was...data falsification information withheld from inspectors. So these should have prompted more aggressive action earlier.

"I think, now that that facility has been shut by Abbott and production isn't going on, it's going to be hard to clear the facility. The overhang of allegations of data falsification are going to be the kinds of allegations that are hard for the agency to clear, even if they're not able to prove a causal relationship between the infections that we saw in children and the facility itself, which -- which, so far, the agency hasn't been able to prove, and they may never be able to prove that.

"The fact that FDA went into that facility this year and found five different strains of Cronobacter, that is a serious concern. And it doesn't appear to have been a state-of-the-art facility, based on the findings in that 483 (FDA document).

"So, they should have been under close supervision. Look, we have -- we have sort of the worst of both possible worlds right now. We have a regulatory scheme that is stringent enough that it does create obstacles to getting into the market for new entrants. There's only been one new entrant in the last 15 years that's a domestically based manufacturer, a company, ByHeart.

"But, at the same time, it doesn't provide stringent enough oversight of the resulting oligopoly -- three companies control 80 percent of the market -- to ensure that there's no snafus that can cause shutdown of those facilities.

"And so, when you do have a shutdown, when the market's that concentrated, it creates these distributed shortages that we're seeing right now that are very hard to resolve. They're going to eventually need to get that facility reopened. The timeline for that is very unclear right now."