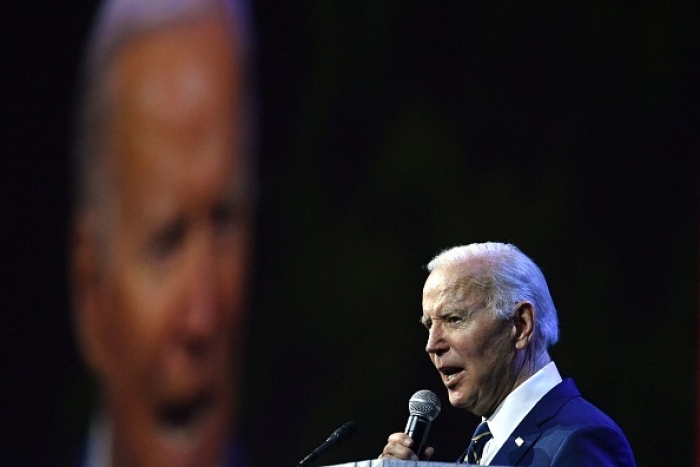 (CNSNews.com) - President Joe Biden, the man who promised to unite the country, is now slamming "as much as one-third of the electorate" as he makes the case for electing Democrats.

Speaking to a Democrat fundraiser in Chicago Wednesday night, Biden said, “[W]e have to take on the MAGA Republicans -- 'Make America Great Again' Republicans. I think they're the most extreme party. And that's what the Republican Party is now. Not everybody Republican believes that. But the fact of the matter is, they run the show — the MAGA Republicans..."

And who are these Republicans who want to make America great? Biden eventually got around to explaining, as the White House transcript shows:

"We have to remember that we’re talking about a relatively small number of people who are the MAGA Republicans.  We may be talking about as much as one third of the electorate.  That’s more than I’d ever thought would occur. But we got to take the fight to them. We got to make our case and make it very strongly, in my opinion.

"We find ourselves protecting and expanding civil rights. Well, we got to speak out more.  We’ve got to make sure that we make our case and keep repeatedly making our case.

"And we have to have — you know, reasserting America’s leadership in the world, because we are..."

Biden said he believes Democrats can win three Senate seats and increase their majority in the House. He said if Republicans take the majority (as some polls indicate they might), "we got a different world we're in."

(Recent polls show many Americans are not happy with the world as it is now.)

"And we can do it honestly, without having to exaggerate or make up things that are not on the docket," he said.

"Without exaggeration," without making things up, Biden said -- after he tossed out a few exaggerations and falsehoods.

Referring to the leaked Supreme Court majority draft opinion indicating the reversal of Roe v. Wade, Biden slammed "the brutality of taking away a woman’s right to control her own body and all the damage that does physically, psychologically, practically.”

“If that decision holds, it’s not only we’re going to be fighting for a woman’s right to control her own body and the brutality that goes along with having to give birth in a circumstance that is something beyond what — that can be tolerated, but what else is going to happen?

“You’re going to see these decisions up for grabs and further split the United States.  We’re going to be arguing about things we shouldn’t have to argue about.”

(In the leaked draft majority opinion, Justice Samuel Alito writes that abortion poses a "critical moral question," and he specifically says "our conclusion that the Constitution does not confer such a right" to abortion "does not undermine" other "post-Casey" rulings, including the one legalizing same-sex marriage.)

Biden repeated his false assertion that Sen. Rick Scott’s 11-point plan is “what the Republican Party stands for, what they’re going to run on.”

"What’s going to happen to a gay child, an L[G]BTQ child in school?" he asked. "I mean, this thing — it’s one thing to take on Disney World. They’re going to storm Cinderella’s castle before this is over.

“But I mean it.  Think about it.  If I told you these things, I think you’d think I was crazy.  You may think I’m crazy anyway, but--"