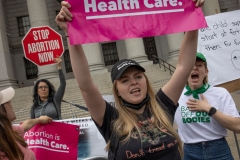 On a day of national pro-abortion demonstrations in response to a leaked Supreme Court draft showing a majority of justices favor overturning Roe vs. Wade, New Yorkers react to a small group of pro-life counter demonstrators on May 14, 2022 in Foley Square, New York City, New York. (Photo by Andrew Lichtenstein/Corbis via Getty Images)

(CNSNews.com) – A leaked unclassified memo reportedly shows that the Department of Homeland Security is concerned about threats of violence towards Supreme Court justices, lawmakers and other public officials, clergy and health care providers leading up to and after the Supreme Court’s official ruling on Roe vs. Wade.

The memo obtained by Axios and dated May 13 says, “Some racially or ethnically motivated violent extremists’ embrace of pro-life narratives may be linked to the perception of wanting to 'save white children' and 'fight white genocide.”

According to Axios, it also warns that “extremist acts” could come from pro-abortion protesters as well.

When asked about the memo and whether these threats are coming from pro-abortion or pro-life activists, White House Press Secretary Karine Jean-Pierre said that President Biden believes that “violence, threats, and intimidation have no place in political discourse anywhere.”

“So, look, the president is clear on this question. He believes the right to peace- — to peacefully protest in this country is fundamental, but he also believes that violence, threats, and intimidation have no place in political discourse anywhere. That is true whether it is in front of a courthouse or in front of a healthcare clinic, and that’s the thing,” Jean-Pierre said.

“I feel — it seems like, to us, it is very one-sided on what we call out as — as intimidation or as violence. So we want to make sure we’re calling out on — on ei- — on both sides of what is happening and what we’re seeing,” the press secretary said.

“While protests — but while protests have been peaceful to date, the Department of Justice has U.S. marshals providing support to support [the Supreme] Court Marshal, and the pres- — and the president believes Congress should pass the legislation to fund increased security for court and judges as soon as possible,” she said.

“Yesterday, in reference to this, the Department of Homeland Security said they are ‘committed to protecting Americans’ freedom of speech and other civil rights and civil liberties, including the right to peacefully protest.  DHS is also committed to working with our partners across every level of government and the private sector to share timely information and intelligence, prevent all forms of violence, and to support law enforcement — enforcement efforts to keep our communities safe,’” Jean-Pierre said.