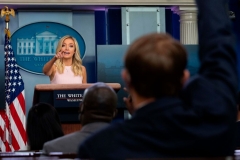 White House Press Secretary Kayleigh McEnany takes questions from reporters during the press briefing at the White House in Washington, DC, on July 13, 2020. (Photo by JIM WATSON/AFP via Getty Images)

(CNSNews.com) – The rhetoric of Democrats opposed to President Donald Trump sending federal agents into Portland to quell violent protests is “unhelpful” and appears to give the violence “a pass,” White House Press Secretary Kayleigh McEnany said on Tuesday.

McEnany opened the White House press briefing by condemning the “violence, chaos, and anarchy” seen at protests in Portland, calling it “unacceptable” and adding that “Democrats continue to put politics above peace while this president seeks to restore law and order.”

"Governor Kate Brown, a Democrat -- Governor of Oregon -- said that the President should, quote, ‘stop playing politics,’ called law enforcement officers ‘secret police,’ and likened it to, quote, a ‘dictatorship.’  The governor also called on the president to get his officers off the streets," the press secretary said.

"Democrat mayor of Portland, Todd Wheeler, said the President is “trying to look strong for his base” while you had Democrats on the Hill, Nancy Pelosi, calling these officers stormtroopers and Jim Clyburn calling them the Gestapo," she said,

"This rhetoric is unhelpful and gives the violence we have seen a pass.  But President Trump will not give the violence a pass.  He will restore order where the Democrat governor and the Democrat mayor are unwilling to admit that they have lost control of their city," McEnany said.

The press secretary said there were “multiple attempts to barricade officers in the Hatfield Courthouse” as well as attempts to set the courthouse on fire.

“Use of eyesight-damaging laser devices have been used and strobe lights against federal agents as well, but according to Speaker Pelosi, when asked about the violent removal of statues, ‘people will do what they do,’” McEnany said.

She cited “Operation Legend” – named after Legend Taliferro,a four-year-old boy in Kansas City, Mo., who was shot and killed in his bed – as a “great example” of state and local officials working together to restore law and order.

“At the governor's request, we went into Kansas City and surged the area with federal assets -- FBI, DEA, ATF, and U.S. Marshals,” the press secretary said.

“This has been a successful operation that has been waged in his name, including the arrest of wanted fugitives.  Similarly, President Trump is taking action in Portland, even though you have a Democrat mayor and Democrat governor unwilling to work with us in this situation.  We are surging resources, along with Secretary Wolf at DHS, and augmenting the Federal Protective Service to safeguard federal property,” McEnany said.

“The bottom line is that this president stands with law and order, which leads to peace, and we will not allow Portland to become the new CHOP, like what we saw in Seattle,” she said.
The press secretary was asked where in the Constitution does the president have the authority to send federal law enforcement to the streets of U.S. cities against the will of local elected officials.

“Yes, well, what you're referring to is Portland, and 40 U.S. Code 1315 gives DHS the ability to deputize officers in any department or agency, like ICE, Customs and Border Patrol, and Secret Service.  ‘As officers and agents,’ they can be deputized for the duty of – ‘in connection with the protection of property owned or occupied by the federal government and persons on that property.’  And when a federal courthouse is being lit on fire, commercial fireworks being shot at it, being shot at the officers, I think that that falls pretty well within the limits of 40 U.S. Code 1315,” she said.

A reporter noted that that is “a matter of protecting federal property, like a federal courthouse, in the case of Portland” and asked the press secretary whether Trump sees limitations to that power.

“Under the law, we believe that agents can conduct investigations of crimes committed against federal property or federal officers, and in the case where you have someone shooting off a commercial-grade firework and then running across the street, we don't believe that that extends past our jurisdiction,” McEnany said.