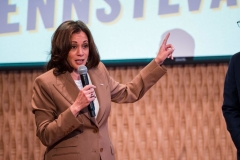 “We must also take steps to protect other fundamental freedoms, including the freedom for a woman to make decisions about her own body, and, you know, on this subject, it’s important to note that to support a woman’s ability — not her government, but her — to make that decision does not require anyone to abandon their faith or their beliefs,” Harris said.

“It just requires us to agree the government shouldn’t be making that decision for her, and think about it: For the first time in generations, the United States Supreme Court — the highest court of our land; the former court of Thurgood Marshall — took away a constitutional right, that had been recognized, from the people of America, from the women of America,” the vice president said.

“We know, NAACP, that our country has a history of claiming ownership over human bodies, and today, extremists, so-called leaders are criminalizing doctors and punishing women for making healthcare decisions for themselves — personal decisions that it is her right to make in consultation with her doctor, her pastor, her priest, her rabbi, her loved ones, not her government telling her what to do,” she said.

“And these so-called leaders — so-called — claim that, ‘Well, you know, we just think that this is a decision that should be made by the folks in the states.  People in the states can vote on this.’  Right? But at this moment, many of those same so-called leaders are the same ones who are passing laws to restrict the ability of people to vote,” Harris added.

When asked whether President Biden also believes that restricting abortion access is similar to slavery, White House Press Secretary Karine Jean-Pierre said Monday that she would like to see Harris’s comments first, but she agreed with the vice president’s assertion that the Supreme Court decision in Dobbs v. Jackson Women’s Health Organization has led to doctors being criminalized and women’s rights being taken away as well as their privacy.

“Following up on something the vice president said today. Does the president agree with her that the recent Supreme Court decision on abortion access is similar to slavery?” Fox News White House Correspondent Peter Doocy asked.

JEAN-PIERRE: I have not seen her comments. I would like to see her comments for myself before–

DOOCY: Her comment was ‘We know– NAACP - that our country has a history of claiming ownership over human bodies, and today extremist so-called leaders are criminalizing doctors and punishing women from making healthcare decisions for themselves.’

JEAN-PIERRE: For me, I appreciate you reading out what she said. I need to actually see exactly what was, what was, what was said in what complete context. That’s what I need to do as a spokesperson for the administration, but I will say that second part of what you just said, the vice president is actually right.

I just, at the top, I just laid out what women are going through in this country because of an extreme decision that SCOTUS made. Because of what they did, it is going to upend and change the lives of women across the country, and now we have to be mindful about contraception.

We have to be mindful about marriage equality, because they have made it really clear. Extreme Republicans, ultra-MAGA Republicans have made it clear that is what they’re going after next, so that does matter.