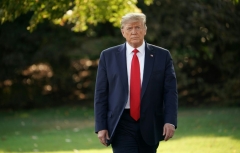 (CNSNews.com) - President Donald warned Tuesday that caravans of illegal immigrants are forming on the southern border, in anticipation of Joe Biden’s presidency and what’s in it for them, but the Trump administration is able to stop it.

“As you know we've completed the wall. They may want to expand it. We have the expansion underway. It's been tremendously successful, far beyond what anyone thought. We're stopping in large numbers the drugs coming into the country for many, many years and decades. We're stopping a lot of illegal immigration. Our numbers have been very good,” Trump told reporters on the White House lawn prior to traveling to the southern border in Texas.

“There does seem to be a surge now, because people are coming up. Some caravans are starting to form, because they think there's going to be a lot in it for them if they're able to get through, but we're able to stop it. The wall has made a tremendous difference. I think some of you are coming with me, but the wall has made a tremendous difference on the southern border," he said.

The president also addressed the Democrats’ efforts to impeach him over the mob attack on the U.S. Capitol last week.

“As far as this is concerned, we want no violence, never violence. We want absolutely no violence, and on the impeachment it's really a continuation of the greatest witch hunt in the history of politics. It's ridiculous. It's absolutely ridiculous. This impeachment is causing tremendous anger, and you're doing it, and it's really a terrible thing that they're doing," he said.

As CNSNews.com previously reported, House Democrats introduced a resolution to impeach Trump on Monday for inciting “an insurrection.”