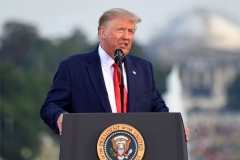 President Donald Trump speaks during the 2020 "Salute to America" event in honor of Independence Day on the South Lawn of the White House in Washington, DC, July 4, 2020. (Photo by SAUL LOEB/AFP via Getty Images)

(CNSNews.com) - President Donald Trump said that the “single biggest difference” between him and the Democrats is that Trump wants law and order as evidenced by the executive order he signed to protect the federal monuments and the Democrats don’t.

“So there's never been a time when two candidates were so different.  I mean, I've seen races where it's like the same exact platforms. I'm even talking about essentially Democrat, Republican. There's not that much difference. There’s a little difference, but there's not much,” he said during a White House Rose Garden press conference.

“Here's one of the greatest difference -- this is without question the single biggest difference: If you want law and order -- for instance, I enacted recently, when I saw what was going on with federal monuments -- we don't have the right to do states, although we're trying to find it., but with the monuments, where they wanted to rip down Andrew Jackson, they wanted to rip down George Washington,” he said.

“They were actually heading over to the Jefferson Memorial, if you can believe that, but this has been going on, and I found an act that we've used, and we have many, many people in jail right now -- many, many people in jail, all over the country -- because they tried to destroy or, in some cases, got it down, a federal statue or monument,” the president said.

Trump said no one has made a move to destroy the monuments since he signed the executive order making it punishable by 10 years in jail to vandalize or destroy statues on federal property.

“We haven't had anybody making a move since I enacted this. I signed an executive order a couple of weeks ago, and it says very simply, ‘Ten years in jail.’ You do it, 10 years in jail. The amazing part is we're able to catch everybody because, thanks to all of you on television -- we appreciate it -- but we have their pictures. We have the man standing on Andrew Jackson's horse,” he said.

"We have the man standing by General George Washington. We have everybody standing -- you know, they were going to go for the Emancipation Proclamation, Abraham Lincoln, standing with a young man who was being freed, and we said, ‘We're going to do something. We can't let this happen,’” the president said.

Trump said that the Emancipation Statue of Lincoln with a freed slave could be removed at some point, but the decision must be made through a legal process and by going through Congress.

“So they were going to have 20- to 25,000 people that night, and nobody showed up. Nobody.  You know that because you were disappointed to see that.  The next night, I believe, 22 people showed up. They said, ‘We're going to make it Friday night instead,’ and 22 people showed up. Four were actually arrested, because we have pictures of them knocking down all the statues. So they're in jail now,” he said.

“So, there has never been an election where we've had this kind of difference. We want strong borders. Without borders -- you've heard me say it 1,000 times -- without borders, you don't have a country. They don't want to have borders; they want to have open borders. It's radical left, and it'll destroy our country,” Trump said.

The president said if he wasn’t in office to do something about it, the United States could end up like Venezuela. Once a rich country, now they don’t have food or water, Trump said.

“And that's exactly the ideology that you have going over here. If I wasn't there to stop it, if I wasn't here to say, “No way, that's not going to happen,’ we'd be in some mess. We’d be in some mess, and Pelosi and Schumer and Bernie and Joe, they'll never stop it. They don't have the power, the strength to stop it. It’s beyond them, but we do. So there's never been a time like this, where you've had an election of people so different,” the president said.