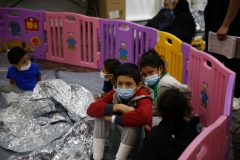 Young unaccompanied migrants, ages 3-9 sit inside a playpen at the Donna Department of Homeland Security holding facility, the main detention center for unaccompanied children in the Rio Grande Valley in Donna, Texas, March 30, 2021. The youngest of the unaccompanied minors are kept separate from the rest of the detainees. (Photo by DARIO LOPEZ-MILLS/POOL/AFP via Getty Images)

(CNSNews.com) - Rep. Dan Bishop (R-N.C.) on Thursday called the Biden administration’s immigration policy “cruelly naïve” because it does not reduce the flow of illegal immigrant children to the United States. Instead, it moves them faster through the processing, and places them with people who may not have been properly vetted.

During a hearing by the House Homeland Security Subcommittee on Border Security, Facilitation and Operations focused on the federal response to unaccompanied children at the border, Bishop cited a Bloomberg article that he said claimed the Biden administration was doing internet searches to try to determine the identity of the people to whom they’re sending unaccompanied minors.

BISHOP: Among the several hundred thousand border enforcement encounters over the four complete months since the inauguration of President Biden, I think I’ve the number’s up 59,000 roughly were unaccompanied children, and of course everybody understands, they’re staying in the United States.

It would appear to me, and as I listen to testimony in this hearing and the questions, the Biden policy is all aimed in the direction of speeding the passage of UCs from CBP to … Health and Human Services’ Office of Refugee Resettlement – and of course then they have a stay in an influx care facility. Then they’re sent throughout the country to take up residence with some family member or a guardian or sponsor, I guess you would call it.

Mr. Shahoulian, in your testimony, you spoke with the top priority being to address the needs of children, and you said that the Biden administration has expanded capacities of agents to speed up the processing of children.

Mr. Huffman cited what he called a success at moving unaccompanied children out of CBP facilities faster both by adding facilities and improving efficiency.

And Mr. Shahoulian again in your comments, you touted that what has been done as having completely transformed border processes, and apparently again, it’s all aimed at eliminating overstays of unaccompanied children at CBP.

The success you tout is increasing the bandwidth, moving people in faster, and this tunnel vision is so bad that one of the policy changes that HHS has made is to waive criminal background checks for occupants who live in the households it sponsors of unaccompanied children placed by HHS.

There’s a Bloomberg article I saw from yesterday … and I understand that the impact of this is that you’re limited to basically internet search engines to try to determine who you’re talking about you’re placing people with, and we’ve been told by the CBP that the cartels dominate the crossing process and they’re throughout the United States engaging in trafficking, sex trafficking, indentured servitude enforcement, and we’ve dropped our guard to that degree. …

Can you speak to that, given what’s happening, aren’t we subjecting these children to the risks of criminality? As Andy Biggs said, they’re making the United States government the logistics arm of the cartels. That seems horrible to me.

LECHLEITNER: That’s a good question. We’re the investigative arm of Homeland Security as it relates to transnational crime. I can’t speak to whether or not there may be crimes that are going to be committed, but if HHS comes across those crimes or if other—if our partners do come across these crimes, and report them to us, we’re going to follow up on that.

We follow up on all these very seriously. We are victim centric as it relates to this vulnerable population. I can say from ‘20 to ‘21, our stats probably partly due to COVID. Unfortunately, it’s complicating things. They trend down a little bit. I can say that, but that’s partly due to the COVID situation, but quite frankly, we don’t know the unknown. We only know what’s been put before us. I really can’t speak to more than that.

BISHOP: I guess I get that, but the problem is we do know, and I think it’s a bureaucratic short-sightedness if you’ll forgive me to just say we’re doing great. We’re moving them though faster. Yeah, we don’t know who we’re sending them to. We know MS-13’s out there. We know there’s trafficking going on. We know … people are being put into indentured servitude right here in our country and that the cartels are active everywhere, and then we pat ourselves on the back and say that’s humane. That is blingered beyond belief, and it’s a classic example of heart over mind. It is not a rational policy. That is not humanitarian in the slightest.