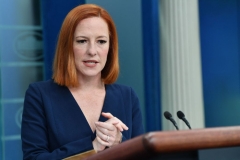 (CNSNews.com) - White House Press Secretary Jen Psaki said Wednesday that the question of whether the Supreme Court leaker should be punished is up for the Justice Department to decide.

“Yesterday, you said the leak raises eyebrows, including for many here in the White House, but does the White House condemn — explicitly condemn this leak and — or has seeing this draft been seen as welcome by some here?” a reporter asked.

“I don’t think we have a particular view on that other than to say that we certainly note the unprecedented nature of it,” the press secretary said.

“What we are mindful of — and I spoke with the president about exactly this question yesterday, and obviously it’s up to the Department of Justice to determine what, if any, action they will take, and I know, obviously, there have been calls for that from some Republicans but also members of the Supreme Court, but our focus is on not losing sight from what the content is in the draft and what is at risk here,” Psaki said.

“And while we have heard a number raised concerns about the leak, our focus is on highlighting what the content in there would risk — put at risk for women across the country,” she said.

“So, again, we’ll leave it to the Department of Justice to make a decision about that. I would note that many Republicans have wanted to talk about that and not about whether they support the protection of a woman’s right to choose, a woman’s right to make decisions with her doctor about her healthcare,” the press secretary said.

“Maybe not a surprise, given we’re — by more than a two-to-one margin, Americans want the Supreme Court to support abortion rights,” Psaki said.

Fox News White House Correspondent Peter Doocy asked, “And to follow up on a question earlier, do you guys think — does the president think the leaker should be punished?”

“Again, that’s up for the Department of Justice and others to determine. What our focus is on is not getting our — distracted — or our eye off the ball of what is most important to people across the country here, which is not the leak and the story of the leak. It is the fact that women’s healthcare is at risk for millions of people across this country,” Psaki said.