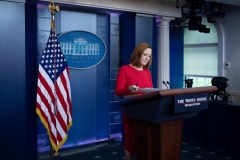 (CNSNews.com) - Top U.S. military leaders were “split” in their advice to President Joe Biden with some advising that if they kept 2500 U.S. troops in Afghanistan, it would lead to a fight with the Taliban, and they would have to reinforce them with more troops, White House Press Secretary Jen Psaki said Tuesday.

Not doing so would lead to the collapse of Afghan security forces and then the Afghan government, McKenzie said.

Their testimony contradicts what Biden said in an ABC interview in August, where the president denied that military leaders advised him to leave 2500 U.S. troops in Afghanistan.

Psaki was asked whether Biden misled the American public about the advice his military advisors gave him on the Afghanistan withdrawal, considering Tuesday’s testimony.

“Let me give you a couple of specifics from the actual transcript, because I know it’s been short-handed a bit - no mal intent, but the question asked by George Stephanopolous was, ‘but your top military advisers warned against withdrawing on this timeline. They wanted you to keep about 2500 troops,’” the press secretary said.

“The president said, ‘No, they didn’t. It was split. That- that wasn’t true. That wasn’t true. It was split.’ I think that’s a pretty key part of that phrasing there. Later on, he-- George Stephanopolous said, “So no one told-- your military advisers did not tell you, ‘No, we should just keep 2500 troops. It’s been a stable situation for the last several years. We can do that. We can continue to do that,’” Psaki recounted.

“No, no one said that to me that I can recall,” the press secretary quoted the president as saying in an interview with ABC.

“I would note today in the testimony that was given by Secretary Austin, by General Milley, they made clear. Secretary Austin specifically said, if you stay there at a force posture of 2500, certainly you’d be in a fight with the Taliban, and you’d have to reinforce,” she said.

“So what should everybody take from that? There was a range of viewpoints as was evidenced by their testimony today that were presented to the president, that were presented to his national security team as would be expected, as he asked for. He asked for a clear, clear-eyed, didn’t ask him not to sugar coat it, what their recommendations were,” Psaki said.

“It was also clear and clear to him that that would not be a longstanding recommendation, that there would need to be an escalation, an increase in troop numbers. It would also mean war with the Taliban, and it would also mean the potential loss, casualties. The president was just not willing to make that decision. He didn’t think it was in the interest of the American people or the interest of our troops,” the press secretary said.

PSAKI: I’m not going to get in specific details of who recommended what, but I can, I would reiterate a little bit of what conveyed before, which is that there were recommendations made by a range of his advisers, something he welcomed, something he asked them to come to him clear-eyed about, to give him candid advice.

What is also clear though, and I’d also note again, what Secretary Austin said today is that was not going to be a sustainable over the long-term troop presence. We were always going to look at escalating the numbers at potentially going back to war with the Taliban, at risking casualties. That was not a decision the president was going to make, but of course, he welcomes advice.

He welcomed advice. Ultimately, it’s up to the commander-in-chief to make a decision. He made the decision that it was time to end a 20-year war.

REPORTER: But you are saying here that military advisers to the president said it was okay to pull all the troops out, that it’d be fine.

PSAKI: That’s not what I said. What I said was they recom-- I think we should not dumb this down for anybody here. We’re talking about the initial phase post-May 1. We’re not talking about long-term recommendations. There was no one who said five years from now we could have 2500 troops and that would be sustainable, and I think it’s important for people to know and understand.

It’s also important to know that the risk we were talking about here were the possibility, the likelihood of increasing a troop presence, which we now know to absolutely have been a reality, given it required 6,000 troops to protect the airport - something we now know/

REPORTER: But the president pulled all U.S. troops out. You’re saying that there were military commanders who advised him that that was a good idea to pull all American troops out and that General Milley, General McKenzie, General Miller, they said something else, but the president’s top military advisers - others we won’t name - told him sure, we can pull everyone out.

PSAKI: That’s not how these conversations go. It’s a risk assessment for every president about what is in the interest of the United States of America, our military and our national interest, and if we had kept 2500 troops, we would have increased the number of troops. We would have been at war with the Taliban. We would have had more U.S. casualties. That was a reality everybody was clear-eyed about. There are some as was evidenced by people testifying today who felt we should have still done that. That is not the decision the president made. It’s up to the commander-in-chief to make those decisions.