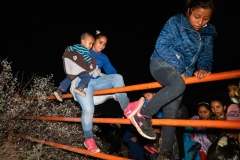 Migrants scale a cattle fence on private property after arriving on the American shores of the Rio Grande River on April 24, 2021 in Roma, Texas. (Photo by Benjamin Lowy/Getty Images)

(CNSNews.com) – DHS Secretary Alejandro Mayorkas could not say Monday whether the reduction in the number of unaccompanied minors in custody at the border was the result of fewer children crossing the border or the result of the Border Patrol more quickly transferring them into the custody of the Department of Health and Human Services.

During an interview with “CBS This Morning,” Mayorkas was asked whether there was also a record in the number of unaccompanied children crossing the border in April as there had been in March and whether he sees his message of “do not come” making a difference.

“We made a very important decision that we would not continue to expel unaccompanied children as the Trump administration did. In late March, you are correct, the numbers were extraordinarily high. We had over 5,700 young children unaccompanied in the custody of the Border Patrol. Now as of yesterday, we had under 700,” the DHS secretary said.

“It's an extraordinary achievement, and it speaks of the commitment and capabilities of the men and women of the Department of Homeland Security and the teamwork with Health and Human Services. We are addressing the needs of children,” he said.

“But does that reflect a reduction in the number of people coming over the border, or just an increase in how quickly you can move people out of your custody into Health and Human Services' custody and then to sponsors?” host Tony Dokoupil asked.

“So we don't have the April numbers yet. We should have those cumulatively within a day or two. The numbers remain high. Whether they are as high as March is yet undetermined, but it really speaks to the reengineering and operationalizing of the process. I said in March that we have a plan. We're executing on the plan, and that it takes time. We are seeing those results in just 30 days,” Mayorkas said.

The secretary acknowledged that the Biden administration is reuniting just four children out of hundreds who were separated from their families during the Trump administration.

“That is indeed true. We expect four families to be reunited tomorrow,” he said.

When asked how the administration was able to reunite them, Mayorkas said, “So this is the work of, once again, the extraordinary commitment in an all-of-government effort following the president's charge that this is a priority. President Biden said we must reunite these families. He directed the creation of a task force of multiple departments and agencies in an all-of-government effort.

“We are working very closely with the American Civil Liberties Union that has been representing the families since its inception and other community-based organizations. This is really about an all-in public/private partnership to reunite the families and begin the healing. Very proud – this is just the beginning,” he said.