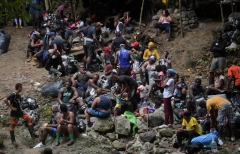 Haitian migrants rest as they cross the jungle of the Darien Gap, near Acandi, Choco department, Colombia, heading to Panama, on September 26, 2021, on their way trying to reach the US. (Photo by RAUL A

(CNSNews.com) – Sen. Ted Cruz (R-Texas) said Wednesday that the Biden administration’s immigration policies are responsible for a 430,000 percent uptick in catch-and-release numbers on the southern border, because on day one of his administration, President Joe Biden stopped construction of the border wall, ended the Remain in Mexico policy, and continued catch and release.

“The Washington Times reported on Sunday that catch and release numbers increased more than 430,000 percent this August compared to last August – 430,000 percent. That’s a percentage so big you almost think it’s a typo,” Cruz said.

According to the Washington Times,

In August 2020, the Trump administration managed something stunning. Border Patrol agents caught more than 47,000 illegal immigrants and immediately released just 10 of them into the interior.

“The Biden Department of Homeland Security is preparing for up to 400,000 illegal immigrants to cross the border this month. We are seeing tens of thousands of Haitian immigrants,” Cruz said.

The senator said that a couple of weeks ago, he was in Del Rio, Texas, and saw 10,503 Haitian migrants camped out under the Del Rio bridge, overwhelming DHS’s capacity.

“Just over a week ago, I met with the Foreign Minister of Panama. She described how this year, the country of Panama – Panama sits on the juncture between South America and North America. This year, they have seen over 80,000 Haitians who had been living in South America crossing into Panama illegally on their way to the United States,” he said.

Cruz said that’s because the president and vice president refuse to enforce the law.

“Those are decisions they made literally the first day in office. Three decisions drove this crisis – immediately halting construction of the border wall – that happened on day one; reinstituting the failed policy of catch and release – that also happened on day one; and most indefensibly ending the incredibly successful Remain in Mexico international agreement,” he said.