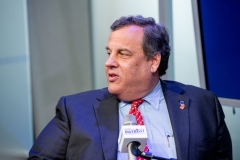 (CNSNews.com) - Former New Jersey Gov. Chris Christie said Sunday that President Joe Biden couldn’t stand up to the Taliban when it came to withdrawing from Afghanistan, so how could he be expected to stand up to Rep. Alexandria Ocasio-Cortez (D-N.Y.), one of the progressive members of “The Squad,” when it comes to passing the bipartisan infrastructure bill and his economic agenda.

“I had a political science professor in college who told me, when your adversary's in the midst of committing suicide, there's no reason to commit murder. The result is the same, and that's what's happening with Democrats right now,” Christie said during a roundtable discussion on ABC’s “This Week.”

“The guy who ran against the progressives, ran against Bernie Sanders and Elizabeth Warren, ran to be a uniter in this country, ran saying he was going to force compromise, and he went up to Capitol Hill, and he capitulated to the progressives, the liberals in his party, and why should we be surprised?” Christie said.

“He couldn't stand up to the Taliban. How could we expect him to stand up to AOC?” he asked.

Christie said that Biden “hasn’t stood up to anyone except for the people in his own party who nominated him,” and he said that Sen. Bernie Sanders (I-Vt.) didn’t vote for Biden.

Former DNC Chair Donna Brazile said that former President Donald Trump invited the Taliban to Camp David, “and I would have personally driven to that mountain to say, take your butt home.”

BRAZILE: Joe Biden has created more jobs in the first couple months of his presidency than any other president.

CHRISTIE: And more inflation, thank you.

BRAZILE: He -- that inflation was already coming down the pipe.

CHRISTIE: Yeah, sure, it was.