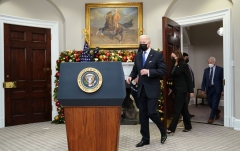 President Joe Biden, Vice President Kamala Harris, and Chief Medical Advisor to the president Anthony Fauci arrive for a briefing on the Covid-19 Omicron variant in the Roosevelt Room of the White House in Washington, DC on November 29, 2021. (Photo by MANDEL NGAN/AFP via Getty Images)

(CNSNews.com) - President Joe Biden suspended travel from South Africa in response to a new COVID-19 variant, Omicron, to give more people time to get vaccinated or get booster shots, he announced on Monday.

“To their credit, the scientific community in South Africa quickly notified the world of the emergence of this new variant. This kind of transparency is to be encouraged and applauded, because It increases our ability to respond quickly to any new threats, and that’s exactly what we did,” he said.

“The very day that the World Health Organization identified the new variant, I took immediate steps to restrict travel from countries in southern Africa, but while we have the travel restrictions slowing the speed of Omicron, it cannot prevent it. Here's what it does. It gives us time,” Biden said.

“It gives us time to take more actions, to move quicker, to make sure people understand you have to get your vaccine. You have to get the shot. You have to get the booster. Sooner or later, we’re going to see cases of this new variant here in the United States. We'll have to face this new threat just as we faced those that have come before it,” the president said.

Biden said that the new variant is not cause for alarm, because the United States has the best vaccine in the world, as well as the best medicines and scientists.

“We’re learning more every single day, and we’ll fight this variant with scientific and knowledgeable actions and speed, not chaos and confusion. We have more tools today to fight the variant than we have ever had before from vaccines to boosters to vaccines to children five years and older and much more,” he said.

The president said that the best protection against Omicron is getting fully vaccinated and getting a booster shot.

“Most Americans are fully vaccinated but not yet boosted. If you are 18 years or over and got fully vaccinated before June 1st, go get the booster shot today. They’re free and they’re available at 80,000 locations coast-to-coast. A fully vaccinated booster person is the most protected against COVID,” he said.

“Do not wait. Go get your booster if it's time for you to do so. If you are not vaccinated, now is the time to get vaccinated and take your children to be vaccinated. Every child aged five or older can get safe, effective vaccines now,” Biden said.

The president encouraged people to wear a mask indoors in public settings. He said that Dr. Anthony Fauci, director of the National Institute of Allergy and Infectious Diseases (NAID) believes that current vaccines will provide at least some protection against the new variant, and the boosters will strengthen that protection.

In the meantime, the White House is working with officials at Pfizer, Moderna, and Johnson & Johnson “to develop contingency plans for vaccines or boosters if needed.”

“I will also direct the FDA and the CDC to use the fastest process available without cutting any corners for safety to get such vaccines approved and on the market if needed, and we’ll do that the same way any modifications are needed or current treatments needed to treat those who get ill with the covid virus. I’m sparing no effort at removing all roadblocks to keep the American people safe,” Biden said.

“On Thursday, I will be putting forward a detailed strategy outlining how we’re going to fight COVID this winter, not with shutdowns or lockdowns,” the president said.

“Let me be clear, not a single vaccine shot America has ever sent to the rest of the world will ever come at the expense of any American. I will always make sure that our people are protected first. Vaccinating the world is just one more tool in how we need to meet our moral obligation as Americans and how to best protect Americans as well,” he said.

“The Delta variant and now Omicron variant all emerged elsewhere in the world. So we cannot let up until the world is vaccinated. We are protecting Americans by doing that as well,” the president said.

Biden said he doesn't think that other countries will be reluctant to report variants and other strains of COVID given the travel ban he placed on South Africa. He also said that South Africa has plenty of vaccines, but it’s dealing with vaccine hesitancy.

“No, I don't think so. I don't think that’s what is going to happen. Again, the reason for the immediate travel ban is there were a significant number of cases unlike any other country …  in the world. We needed time to give people an opportunity to say get that vaccination now before it heads, it’s gonna move around the world,” he said.

“I think it’s almost inevitable there will be, at some point, that strain here in the United States. I don't think anyone is going to be reluctant to report. We have also moved to do more, For example, we provided more vaccines, as I said, than all the other countries in the world combined. We’ve provided significant vaccines to South Africa and that region,” Biden said.

“Matter of fact, South Africa doesn’t need any more vaccine. They[‘re having trouble getting it out into people's arms, and the reluctance is there. No, I don't think it would have that effect,” the president said.

When asked what the U.S. is doing to screen international travelers for the variant and what is being done to see if the variant already arrived, Biden said, “There's a lot being done,” and he asked Fauci to explain what those measures are.

“We already have in place when people come into the United States they have to be tested before they get on, and they have to show vaccination documentation. So even before Omicron came in, we had a situation where we’ll be able to test, and talking about testing, fortunately for us, the PCR's that we mostly use would pick up this very unusual variant that has a real large constellation of mutation. Fortunately for us, the PCR's that we do, do pick it up,” Fauci said.

As to whether he’s calling on states and local officials to reinstate mask mandates in areas where they have been lifted, Biden said he encourages everyone to “wear a mask when they’re indoors in crowded circumstances like we are now unless you are eating or speaking at a microphone.”

As far as whether he’s considering travel restrictions on other countries where the variant has been detected, Biden said that “the degree of spread impacts on whether or not there's a need for travel restriction, but I don't anticipate that at this point. We will see. We will see if that works.”

“Mr. President, is this the new normal that Americans should expect anticipating future potential variants. Should we expect intermittent travel restrictions and potential drops in the stock market going forward? Do you have any words of reassurance that this won’t become the new normal? And then for you and Dr. Fauci, Dr. Fauci said earlier on CBS that lockdowns, shutdowns are off the table for restraining COVID going forward. You said that won't be part of your plan on Thursday, but why is that? Why are you taking that off the table?” a reporter asked.

“To answer your first question, I expect this not to be the new normal. I expect the new normal to be everyone ends up getting vaccinated with a booster shot, so we reduce the number of people who aren’t protected to such a low degree that we’re not seeing the spread of these viruses,” Biden said.

“Now we remain to be seen what exactly the elements of this particular strain are, but if they’re as I hope, then it's not going to be fundamentally different than in the past,” the president said.

He added that lockdowns are off the table “for now” because “if people are vaccinated and wear their masks, there's no need for the lockdowns.”

Biden said that requiring testing or mandating vaccines for domestic travel the way they do on international flights is not recommended at this point, and he plans to wait for the scientific community to give him a recommendation on that.

When asked whether travel restrictions are too late to be effective given that Fauci says the new variant could already be here, Biden said, “You understand the point of the travel, of the restrictions to give us time to get people to get protection, to be vaccinated and get the booster. That's the reason for it.”