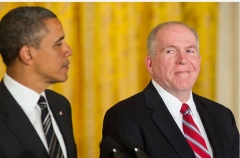 Brennan’s tweet included the text of a tweet President Trump had sent out contrasting the relative readiness of Florida and Nevada to handle mail-in voting.

Brennan was appointed CIA director by President Barack Obama in 2013 and left that position on Jan. 20, 2017, the day that President Trump was inaugurated.

“While the damage he has done to the body & soul of our nation will take years to repair, the road to recovery starts in a few months,” said Brennan.

The Trump tweet that Brennan included with his own said: “Nevada has ZERO infrastructure for Mail-In Voting. It will be a corrupt disaster if not ended by the Courts. It will take months, or years, to figure out. Florida has built a great infrastructure, over years, with two great Republican Governors. Florida, send in your Ballots!”