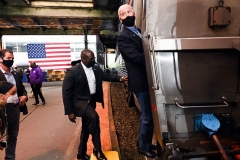 (CNSNews.com) - Democrat Joe Biden and his wife earned almost a million dollars -- $985,233 in adjusted gross income -- in 2019 alone, but never mind that. He's portraying himself as working-class Joe on the stump, making a rich vs. poor pitch.

At an old-fashioned whistle-stop in Pittsburgh on Wednesday, Biden said:

We measure our success, where I come from, based on what families talk about at their kitchen tables when they get up in the morning, and at night after the kids have cleared the plates and after the Mom and Dad sit down and talk about, 'Are we gonna be able to get four new tires on that car? I know those tires are bald, but you're gonna have to wait another month, honey, before we can buy them. We can't do it now.'

(At the house where he grew up long, long ago, that is.)

Biden recently released his 2019 tax and financial information, and as The Wall Street Journal reported:

Mr. Biden employed a significantly scaled-back version of a tax-avoidance technique that he used in 2017 and 2018 on the income that he and his wife, Jill, earned from books and speeches. They set up S corporations to receive that income.

By doing so and by taking relatively small salaries from those companies as a share of profits, they avoided a 3.8% tax on those profits...Such businesses are supposed to pay their owners reasonable compensation for work. For businesses that generate profits from their owners’ labor, large gaps between profits earned and wages paid can be considered questionable.

But he did scorn Trump for allegedly scorning "working-class folks."

"That's who he's hurt," Biden said. "Matter of fact, he hasn't done anything to help working families. He looked the other way while more companies have closed their factories and shipped jobs overseas.

"President Trump--Trump said he ran for office because he was concerned about the 'forgotten man.' Well as soon as he got elected, got inaugurated, he forgot the forgotten man. The truth is, I don't think he ever respected us in the first place..."

He promised to "build our country and our economy back better than it was before."

Here are some of the promises Biden made in Pittsburgh on Wednesday:

-- I'm gonna make sure that every single contract let by the federal government has to be let to someone who makes it all in America. All in America. The entire supply chain. Not a joke. Not a joke. All made in America. And we're gonna be able to do that in a way that's never been done before.

-- Gonna finally get control of this pandemic that's stolen more than 205,000 lives and climbing. 205,000 lives. It's estimated unless we change something quickly between now and the end of the year there'll be another 200,000 Americans dead.

-- Not only are we gonna guarantee your healthcare we're gonna lower healthcare costs...All you gotta do is make sure that we change the law that says that Medicare can negotiate prices for all healthcare products. All prescription drugs. That would lower prices dramatically.

-- We're gonna make sure that you not only have the care you had before in terms of the Affordable Care Act.

-- We're gonna lower prices for drugs by close to 60 percent--any new drug coming on the market gonna have to go before a con--a board of 25 leading experts on medicine, set the price for that drug at the outset that you make a significant profit, but you can't gouge people. And once the price is set, you can't raise that price at all other than the price of medical inflation.

For the record, at Tuesday's debate, President Trump told Biden:

"[L]et me tell you about the stock market. When the stock market goes up, that means jobs. It also means 401ks. If you got in, if you ever became president with your ideas, you want to terminate my taxes. I’ll tell you what, you’ll lose. Half of the companies that have poured in here will leave. And plenty of companies that are already here, they’ll leave for other places. They will leave and you will have a depression, the likes of which you’ve never seen."