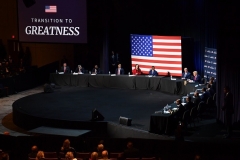 (CNSNews.com) - "We will make no progress and heal no wounds by falsely labeling tens of millions of decent Americans as racist or bigots," President Trump told a gathering in Dallas, Texas on Thursday. "We have to get everybody together."

While Trump's critics fiercely accuse him of dividing the country, he pointed an accusing finger back at them:

In recent days there has been vigorous discussion about how to ensure fairness, equality, and justice for all of our people. Unfortunately, there are some trying to stoke division and to push an extreme agenda, which we won't go for, that will produce only more poverty, more crime, more suffering.

We must invest more energy and resources in police training and recruiting and community engagement. We have to respect our police, we have to take care of our police -- they are protecting us, and if they are allowed to do their job they will do a great job. And you always have a bad apple -- no matter where you go, you have bad apples, and there are not too many of them...

...But there is no opportunity without safety. In Chicago, 40 people were shot and 18 people were killed in one day Sunday, May 31. Think of that, 48 people shot, 18 people killed. You don't hear about it too much. Every child should be able to grow up in a safe community free from violence and fear. They have taken a lot of the police protection away in Chicago, and they have great, great police in Chicago...They could the job very easily.

Americans are good and virtuous people. We have to work together to confront bigotry and prejudice wherever they appear, but we will make no progress and heal no wounds by falsely labeling tens of millions of decent Americans as racist or bigots. We have to get everybody together...If we don't do that we have--we have problems, and we will do that. We will do it, I think we're going to do very easily. It will go quickly and it will go--it will go very easily.

We have so many different elements of strength in this country. We have such potential in this country. We have the greatest potential, we have the greatest country in the world, but we get off subject, we start thinking about things that don't matter, or don't matter much, and the important things we don't even discuss, but we are here to discuss some very important things today.

-- Trump plans to issue an executive order encouraging police departments nationwide to meet the most current professional standards for the use of force including tactics for de-escalation. He wants pilot programs that allow social workers to work together with law enforcement officers.

"School choice is a big deal, because access to education is the civil rights issue of our time," Trump said. "When you can have children go to a school where their parents want them to go and it creates competition and other schools fight harder because all of a sudden, they say well, we're losing it. We have to fight hard. It gets better so many different ways.

"But there are groups of people against that. You have unions against it, you have others against it and they're not against it for the right reasons. They're against it for a lot of the wrong reasons and we're going to get that straightened out," Trump said.