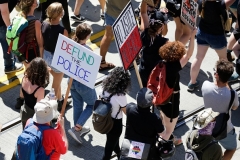 A "Defund the Police" march in Seattle, Washington on August 5, 2020. (Photo by JASON REDMOND/AFP via Getty Images)

"Cops have about 60 million encounters with Americans every year," Kennedy told Sean Hannity:

Let me state a few propositions that I think reflect common sense and with respect to which most Americans other than the wokeristas agree.

Number one, most cops, many of whom happened to be black, do not get up every day and go to work hoping for the opportunity to hurt a person of color. Number two, cops are necessary. If you support defunding the police, you have tested positive for stupid.

Number three, it is immeasurably foolish to resist arrest. It is going to end badly, even if no one is hurt. You can't win, the government has the bomb, it's very dangerous, don't resist arrest.

And number four, and this is just me personally, if you are a cop and you see someone about to stab me, I would personally appreciate it if you would stop them. Shoot them if you have to, I don't care who they are. I don't consider that police misconduct. I consider that saving my life.

"In our post-journalism world," he said, "many members of the media have a narrative, and they only want to cherry pick and pick instances which show cops at their worst. I've said it before, if you hate cops just because they’re cops, then feel free to call a criminal -- called a meth-head the next time you get in trouble.

Kennedy added that police misconduct does exist and should be punished. But he also said to be fair about it, media activists should cover all police encounters that end with force, not just a selective few that support the cops-are-racist narrative.

"I don't know what the investigations in North Carolina and Ohio will show, but before we can involve any conclusions and assume its racism, we ought to have an investigation and understand it's not representative of every case," Kennedy concluded.