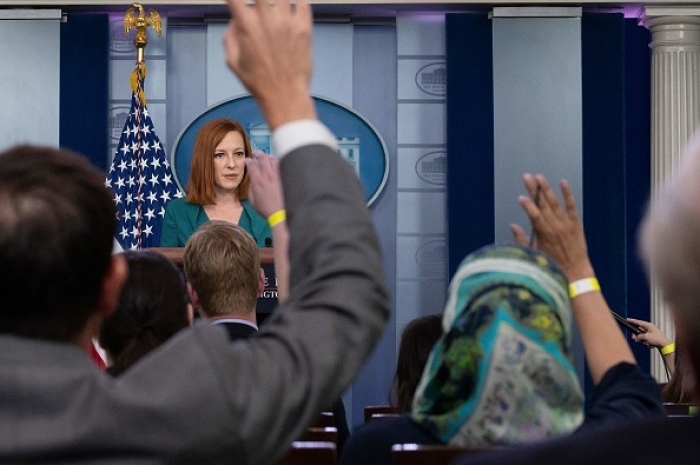 (CNSNews.com) - At Tuesday's press conference, a reporter asked President Biden's spokeswoman Jen Psaki about recent "messaging" from the White House: "Who came up with this phrase 'ultra MAGA'? Why the need to kick it up a notch? MAGA wasn't enough? I mean, why now use this phrase?" she asked.

"It's the president's phrase," Psaki said. She noted that President Biden first used "ultra MAGA" last week, on May 4, in a speech on the economy.

"And you -- you've heard the President talk about this. It's -- but it's not just obviously putting at risk a woman's right to make choices about her own health care. It is also as you heard him talk about this morning, Rick Scott's extreme plan that will raise taxes on 75 million Americans making less than $ 100,000 a year.

"It is Rick Scott's plan to get rid of, eliminate. That's what sunset means, get rid of Medicare and Social Security, something people over 70 in this country rely on. And it's also the obsession with culture wars and wars against Mickey Mouse and banning books. The president thinks that's extreme. That is not what the American people care about or what they want.

"And so to him, adding a little ultra to it, gives it a little extra pop."

Another reporter asked Psaki, "So then who is the ultra MAGA Republican?"

"I would say people who support that portion of the Republican agenda," Psaki said.

"They can all make their own choices," Psaki said, "and I can -- we can let others evaluate that. But I would say that the president's view is those who support a plan by Rick Scott, by Chairman Scott, that would raise taxes on 75 million Americans and get rid of, sunset, eliminate -- whatever you want to call it, Medicare and Social Security.

"If you're on the other side of that, you're supporting an ultra MAGA position, in the president's view. So, we'll let -- we don't need to name-call individuals unless they have positions that are aligned with what he feels is the ultra MAGA wing of the party," she said.

(As a reminder, MAGA stands for "Make America Great Again." So would "ultra MAGA" make America extra great?  Not according to Biden, whose poll numbers have plummeted along with the economy.)

Both Biden and Psaki have falsely claimed that Sen. Rick Scott's 11-point economic plan represents the agenda of the entire Republican caucus. Senate Minority Leader Mitch McConnell has said that Scott speaks for himself.

At a March 1, 2022 news conference, McConnell if Republicans take control of the Senate after the November election, "I'll decide in consultation with my members what to put on the floor. And let me tell you what would not be a part of our agenda. We will not have as part of our agenda a bill that raises taxes on half of the American people and sunsets Social Security and Medicare within five years. That will not be part of a Republican Senate majority agenda," McConnell said at the time.

"Let me tell you about this ultra-MAGA agenda," Biden said. "It’s extreme, as most MAGA things are.  It will actually raise taxes on 75 million American families, over 95 percent of whom make less than $100,000 a year...And under this new plan, this tax plan — the ultra-MAGA agenda — while big corporations and billionaires are going to pay nothing more, the working-class folks are going to pay a hell of a lot more."

Biden, Psaki Falsely Claim That Sen. Rick Scott's Plan Is What Republicans Are 'Running On'

Sen. Rick Scott: ‘If Biden Wants to Actually Fix the Inflation Crisis He Created, He Should Resign’