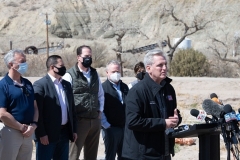 House Minority Leader Kevin McCarthy addresses the press during a congressional visit to the border community of El Paso, Texas on March 15, 2021. (Photo by JUSTIN HAMEL/AFP via Getty Images)

(CNSNews.com) - What's happening at the Southwest border "is more than a crisis; this is a human heartbreak," House Minority Leader Kevin McCarthy (R-Calif.) told a news conference in El Paso, Texas on Monday. He called it the "Biden border crisis."

McCarthy led a delegation to the overrun border to see the conditions first hand. He said President Joe Biden should do the same:

He can continue to deny it, but the only way to solve it is to first admit what he has done. And if he will not reverse action, it’s going to take congressional action to do it. And that’s why we’re here, we want to find solutions.

McCarthy said he sent a letter to Biden before traveling to El Paso, asking if they could "work together to solve this problem," but McCarthy never heard back.

McCarthy said the influx of thousands of children is not only a humanitarian crisis -- it's taking Border Patrol agents offline in the midst of a surge, it's draining American prosperity, it's bringing in drugs and crime, it's likely to be spreading COVID, and it's a national security concern:

"When you talk about what’s coming across, I just left a few border agents, and I asked them, 'Who are the individuals you’re catching?' Yeah, they’re from Central America. But you know who else? Iran, Yemen, Sri Lanka.

“When I walked through the facility, there was more Haitians than any other nationality I saw. And why were they coming now? You ask the border agents, they were shocked themselves because they’re being released into the country."

McCarthy said he asked a doctor if the children and teenagers are being tested for COVID before they are released to relatives or sponsors: "More than 10% are testing positive, while (they're) being stored together. In a time when the president will keep our country closed, when maybe we have hope for a 4th of July to get together just with our family, how much spread of COVID is he creating every single day by his policies along this border? It’s wrong, and it has to end and it needs to end now."

Rep. David Joyce (R-Ohio) told the news conference that "with fentanyl coming across this border, more kids are going to die. We’re killing our own kids. We’re making it unsafe for those kids who were making the voyage up here. And why? Because we don’t tell them that we are a country of immigrants, but we are also a country of laws. And those two don’t have to contradict each other."

Rep. Clay Higgins (R-La.) said Joe Biden "allowed this crisis to develop" by the messages he sent during his presidential campaign: Biden "continuously messaged that he was going to weaken law enforcement missions on the border and stop construction of the wall, create a pathway to citizenship, or amnesty for illegal residents that were already here. The cartels were listening...So they began getting ready, man. They were hoping for a Biden victory, and on January the 20th, Joe Biden was inaugurated as our president," Higgins said.

So I’m going to ask President Biden to please pay attention because I’m talking straight to you now, sir. Allow us an audience with you. You have been misled. The policies that you have signed into effect are injuring the American citizens you serve and endangering the children of God that are making this trek to our Southern border under incredibly dangerous circumstances. Allow the voice of reason to enter the White House.

You took charge of this country on January the 20th, and on the very same day, you gave control of our border to the cartels. You can fix this thing, working with us. If America is paying attention, and I believe they are, your phone is going to start ringing. I implore you, good Sir, let us in. We can fix this thing. It’s beyond a crisis at the border. It’s a threat to our Republic and you Mr. President have a responsibility to listen to the citizens that we serve.