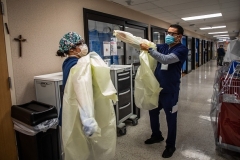 Health care workers, such as these two registered nurses in California, are in high demand as the COVID pandemic surges. (Photo by APU GOMES/AFP via Getty Images)

(CNSNews.com) - The Labor Department's final employment report of 2021, released on Friday morning, shows steady improvement since January a year ago.

But labor force participation remains a concern, as does the number of Americans counted as not in the labor force -- not working and not looking for work, for whatever reason. Those are just two of the Labor Department measures of economic health that have not rebounded to their pre-pandemic levels.

And notably, today's report does not fully account for the recent holiday omicron surge.

The Bureau of Labor Statistics says 199,000 jobs were added to nonfarm payrolls in December, well below analysts' estimates of around 422,000.

The number of employed Americans -- including full- or part-time workers who received pay for any part of the survey pay period -- increased by 800,000 to 155,975,000 in December, the sixth straight monthly increase;  while the number of unemployed Americans -- those actively looking for work in the prior 4 weeks -- dropped by 558,000 to 6,319,000, resulting in a low unemployment rate of 3.9 percent, even better than last month's 4.2 percent.

Last month’s 3.9 percent unemployment rate is the lowest it's been since the 3.5 percent in February 2020.

In December, the civilian non-institutional population in the United States was 262,136,000. That included all people 16 and older who did not live in an institution, such as a prison, nursing home or long-term care facility.

Of that civilian non-institutional population, 162,294,000 were participating in the labor force, meaning they were either employed or unemployed -- they either had a job or were actively seeking one during the last month. This resulted in a labor force participation rate of 61.9 percent in December -- up a tenth of a point from the 61.8 percent in November, and the highest participation rate of Biden's presidency. It was 61.4 percent when Biden took office.

The labor force participation rate reached a seven-year high of 63.4 percent in January 2020, the final year of Trump's presidency and just before the onset of COVID.

He attributed "some of the softness in participation" to the aging of the population and retirements that are taking people out of the labor force. "But participation for prime-aged individuals also remains well below pre-pandemic levels," he said, "in part reflecting factors related to the pandemic, such as care-giving needs and ongoing concerns about the virus.

"As a result, employers are having difficulties filling job openings. These impediments to labor supply should diminish with further progress on containing the virus."

But hopes for virus containment have not yet been realized, as COVID continues to infect not only the unvaccinated but vaccinated people as well.

Not in the labor force

In December, 99,842,000 people were not in the labor force, meaning they were neither employed nor unemployed -- not working and not looking for work. This category includes retired persons (a growing number of baby boomers), students, those taking care of children or other family members, and others who are neither working nor seeking work.

Among those not in the labor force in December, 1.1 million persons said they were prevented from looking for work due to the pandemic. This measure is down from 1.2 million in November.

The number of people not in the labor force has been steadily climbing for years, reaching a record high of 103,418,000 in April 2020, as the pandemic took hold. The highest it's been under President Joe Biden is 100,708,000 this past February. In fact, this number has remained above 100,000,000 for all but two months (November and December) of Biden's presidency.

In December, notable job gains occurred in leisure and hospitality, in professional and business services, in manufacturing, in construction, and in transportation and warehousing.