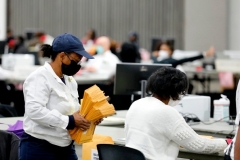 (CNSNews.com) – As of around 6 PM eastern on Wednesday, the Associated Press and Fox News have assigned 264 electoral college votes to Joe Biden – just six off the 270 required to win the presidency. They have President Trump on 214 electoral votes.

Media organizations have called Michigan and its 16 electoral votes for Biden. According to the AP count, Trump was trailing in the Great Lakes State by 70,511, with 99 percent reporting.

In the other key battleground contests:

The Trump campaign is taking legal action in Pennsylvania, claiming a lack of transparency.

“We are suing to stop Democrat election officials from hiding the ballot counting and processing from our Republican poll observers – observers whose only job is to make sure every valid ballot is counted, and counted once,” said deputy campaign manager Justin Clark. “We are also suing to temporarily halt counting until there is meaningful transparency and Republicans can ensure all counting is done above board and by the law.”

The campaign has also filed lawsuits in Michigan and Georgia, and has called for a recount in Wisconsin (10 electoral votes), where Biden was leading by 20,517 votes with 99 percent reporting.

Speaking in Wilmington, Delaware around 4 PM, Biden voiced optimism that he would reach the 270 votes needed to win the presidency.

“I am not here to declare that I have won,” he said. “I am here to report that when the count is finished, I believe I will be the winner.”

Biden said the campaign felt “good about Pennsylvania: Virtually all the remaining ballots to be counted were cast by mail, and we are winning 78 percent of the votes by mail in Pennsylvania.”