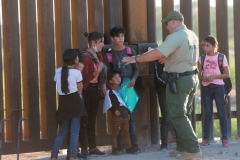 United States Border Patrol agents detain families from Central and South America who have been crossing into the United States from Mexico to ask for asylum, April 30, 2021 outside of Yuma, Arizona. (Photo by Andrew Lichtenstein/Corbis via Getty Images)

(CNSNews.com) – The Biden administration has given up the practice of issuing citations for appearance in immigration court for migrants that illegally enter the U.S., Texas Gov. Greg Abbott said on Sunday.

“It shows the president’s, President Biden's approach to this, and that is to abandon the rule of law,” Abbott told Fox News’s “Sunday Morning Futures.”

“What they're supposed do is to detain them, to cite them, to require that they show up for court hearing, and they've even abandoned the practice of requiring citations and requiring an appearance at the courts to show up, so that does mean that all you have to do is get across the border and you can do anything you want to do, and of course that means it's an abandonment of the legal immigration laws passed by the United States Congress,” he said.

When asked why the Biden administration is doing this, Abbott said, “What you're asking right now is the most important question in the United States, that too many people are not asking, not enough journalists are asking, not enough members of Congress are asking about why the Biden administration is doing nothing to stop this from happening and not even acknowledging what the consequences are going to be to the United States of America, because you mentioned one thing about the cost, and that is the cost that we are incurring with regard to securing the border, but we did talk about the health care cost, education cost, law enforcement cost, all these other costs that will be not just paychecks but these other states, the gangs, the human traffickers eventually go to.”

Abbott noted that Biden didn’t mention the border during his speech last week to a joint session of Congress.

“First, about the president not mentioning the border in his state of the union address, I think it shows candidly he does not care about the border and they do not want to resolve the challenges that we have on the border,” the governor said.

“But I will tell you this, the first 100 days of the Biden administration they’ve been great for the cartels, for the gangs, for the human traffickers who have been exploiting the border, because what happens is you have all these young migrants surge the border and the Border Patrol officers are occupied in dealing with those who are surged in, and that is when the cartels and gang members they’re able to use the open spaces to sneak across the more high-valued people such as terrorists, such as people with criminal records and as well as fentanyl, the drugs and things like that, and that's exactly why we have all of these Department of Public Safety officers down here, because we are working for Texas to deploy resources to secure the border,” he said.

Abbott said that Texas usually allocates $800 million every two years to secure the border, but this year, the cost will exceed $1 billion.

“This doesn’t come free. Our state legislature, they allocate $800 million every two years for the state to pay for this. This year, because of the extended time we’ll have the National Guard on the border, it likely will clearly exceed a billion dollars for the state to have to secure the United States of America. Here's our goal, we’re paying for this but I want to have Texas secure the border and have the Biden administration pay for it,” he said.

The governor said the issue of illegal immigration doesn’t just affect the border states, the smuggling of illegal drugs, human trafficking, and gangs will end up in other states across the country.

“You have people in the country and the mid-western part, and he northern part, they think that's a border issue. We don’t have to worry about it,” Abbott said.

“The border comes to them every single day because as people cross the border, they take the gang members will export the drugs to Chicago to New York to North or South Carolina even up to Washington state or other places like that, so every state is affected other people coming across the border illegally, and that's exactly why all of us need to join together in this process to make sure we are securing it so that we are stopping the drug traffickers and the human traffickers,” he said.

Host Maria Bartiromo said she talked to a Border Patrol guard who said that a group from China paid the cartel $50,000 a head to sneak them into the country.

When asked why China might be sending people to the border, Abbott said, “Could be espionage. There again, this shows the danger of the Biden administration not doing anything, because we need to debunk if there is anybody out there who thinks that these are still just people coming from Mexico or Central America coming here to engage in agriculture or something like that. They're forgetting about the people from China, from Iran, from terrorist-based nations, could be espionage.”

Abbott said the border crisis is the biggest crisis the administration is dealing with, yet they won’t acknowledge it is a crisis, and they haven’t traveled to the border to address it.

“Until they come down here and see exactly what's going on, on the ground, see how porous the border actually is, see who is coming across the border and how dangerous they are, they’re not going to solve the problem. They need to come to grips with the magnitude of their problem, and they need step up and address it,” the governor said.

He said the root cause for the border crisis is “lack of border security.”