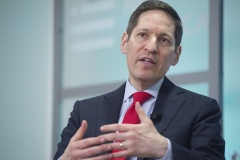 Dr. Tom Frieden, former director of the Center for Disease Control and Prevention (CDC), speaks about the Zika outbreak at the New America think tank in Washington, DC, on July 13, 2016. (Photo by SAUL LOEB/AFP via Getty Images)

(CNSNews.com) – Former Director of the Centers for Disease Control and Prevention (CDC) Tom Frieden told “Fox News Sunday” that the United States is reopening too fast and “if you open when cases are still increasing … it’s like leaning into a left hook.”

When asked to explain the new surge in cases particularly in the South and the West and whether those regions opened too soon and without enough restrictions, Frieden said, “As I said to you six weeks ago today, this is going to backfire. We're moving too fast. If you open when cases are still increasing, as many states did, it's like leaning into a left hook. You're going to get hit hard, and that's what's happening.

“When we see Arizona, Texas, Florida, South Carolina, they are currently in a rapid upswing and sad to say, this is going to continue to get worse for weeks, because the physical distancing that they're implementing now will only take effect -- you won't see it for another few weeks, so we are going to see a few more weeks of increases in all likelihood in several states,” he said.

“Now, there's some comfort in the fact that it's younger people, but what starts in the young doesn't stay in the young. Younger people have parents, uncles, nephews. They go out to places to buy food, and we are going to see increasing spread. That's why the three W’s are so important: wear a mask, wash your hands or use sanitizer, and watch your distance," Frieden said.

There's something everyone can do. We are really all in this together, and if we work together we can help control the virus and get our economy back. Public health and health issues are not getting in the way of our recovery. They are the route to our recovery," the former CDC director said.

Frieden said the coronavirus has “the upper hand,” it’s “not going to go away on its own.”

“We have to stop it and only we can do that by working together, but we are all sick and tired of staying home, but you know what, the virus is not tired of making us sick, and what we're seeing, particularly in southern states, but in most parts of the U.S., is the virus increasing and in some states increasing explosively,” he said.

When asked whether the surge in COVID-19 cases is a function of more testing or a reflection of the fact that the virus is actually spreading, Frieden said, “As a doctor, scientist, an epidemiologist, I can tell you with 100 percent certainty that in most states where you're seeing an increase, it is a real increase.

“It is not more tests. It is more spread of the virus, and the one number to look at that's very important is the percent of tests that's positive. The number of cases, that can vary some because we are only diagnosing 10, 20 percent of all cases. So the numbers you're seeing are just a reflection, a tip of the iceberg, of even more spread,” he said.

“But where the numbers are increasing, you got Arizona with nearly one out of four tests positive and at the same time you are increasing the number of tests, I can tell you with absolute certainty that's explosive spread of coronavirus,” Frieden added.

When asked to why the number of COVID-19 cases are exploding, but the number of deaths has dropped, Frieden said, “There are a few things going on. First off, deaths will lag cases by about a month. It takes some time for someone to feel sick, get hospitalized and, unfortunately, die.

“Second, the cases do appear to be in younger people now and the death rate is far, far, far lower in younger people than older, but as I said earlier, what starts in young adults, doesn't stay in young adults. So there may be a lag until we see cases. It's possible that older people are shielding themselves more and we are also getting better at caring for the disease at hospitals,” the former CDC director said.

“So the explosive spread isn't being followed yet by an explosive increase in deaths, but what we are seeing in some states already is a big increase in intensive care unit admissions and that's a sign that this is not benign, this is going to result in more deaths. We estimate in the next month we will see at least 15,000 more deaths in the U.S.,” he added.