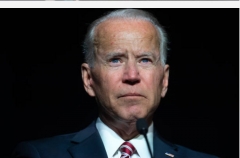 (CNSNews.com) - Former Vice President Joe Biden said in a virtual town hall meeting today with the Service Employees International Union that America has had racists who tried to get elected president in the past but that Donald Trump is “the first one that has.”

“And what President Trump has done in going—his spreading of racism—the way he deals with people based on the color of their skin, their national origin, where they’re from, is absolutely sickening,” Biden said in the video town hall, which is available on Facebook.

“We’ve had racists and they’ve existed and they’ve tried to get elected president,” said Biden. “He’s the first one that has.

“And the way he pits people against one another is all designed to divide the country. Divide people, not pulling them together,” Biden said.

The video can be viewed on Facebook by clicking here. The comments quoted above come with 45:00 left in the video.