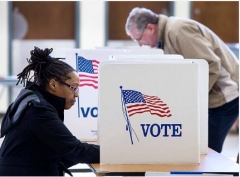 (CNS News) -- A recent poll from Rasmussen shows that 36% of black voters approve of Donald Trump’s job as president.

As president, Trump has touted economic numbers in the black community, especially highlighting low unemployment numbers. Before the Coronavirus pandemic, the White House released numbers in November 2019, showing black unemployment at a record low of 5.4%.

In November 2019, the Trump campaign launched the Black Voices for Trump program, which focused on increasing black turnout in the 2020 election.

Pastor Darrell Scott, an Ohio pastor and one of the co-chairs of Black Voices for Trump, has described Trump as the "most pro-black president."

In 2016, Donald Trump won only 8% of black voters compared to Hillary Clinton, who won 88%, according to Pew Research.

Yet, Trump still performed better with black Americans than Sen. Mitt Romney (R-Utah) did in 2012, who won only 6% of black voters compared to President Obama’s 93%.