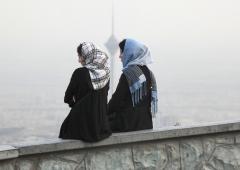 (CNSNews.com) – The Biden administration, which has pledged to put human rights at the center of its foreign policy, appears reluctant to speak out unequivocally against Iran’s recent election to the U.N. agency “dedicated to the promotion of gender equality and the empowerment of women.”

Although the U.S. was praised earlier for pushing for a recorded vote on the matter – rather than allow Iran’s candidacy for the Commission on the Status of Women (CSW) to be waved through “by acclamation” – the fact the State Department won’t directly criticize the Iran’s elevation to the body is raising eyebrows.

It comes amid continuing efforts by U.S. and other representatives to salvage the Obama-era Iran nuclear deal. Talks underway in Vienna aim to find a way for both the U.S. and Iran to return to compliance with the accord, from which President Trump withdew in 2018.

Iran is ranked near the bottom of the World Economic Forum’s latest “Global Gender Gap” survey, in 150th place out of 156 countries featured in the 2021 report that looks at how women fare in the areas of political empowerment, economic participation and opportunity, educational attainment, and health and survival.

Yet when the Economic and Social Council (ECOSOC), the U.N. organ that coordinates socio-economic and related affairs, convened last month to fill vacancies on the CSW, Iran was one of the countries put forward by the Asia regional group in a “closed slate” – five candidates for five vacancies.

In the absence of any competition, ECOSOC would ordinarily have simply approved the five “by acclamation,” but the U.S. called for a recorded vote. In that secret ballot vote, 53 of ECOSOC’s 54 members voted, and Iran received 43 votes.

At a State Department press briefing last Thursday, spokesman Ned Price was asked about the vote, and read from a statement expressing concern about the process – especially the lack of competition – but despite being asked several times would not state unambiguously that the U.S. does not think Iran belongs on the CSW, only implying that in a roundabout manner.

“The unopposed candidacies of countries that engage in torture, in abuse, violations of human rights and due process – it was a troubling feature of this election,” Price read out.  “That’s precisely why the United States called for the vote on the Commission of the Status of Women, specifically to allow countries to register their opposition.”

After declining to confirm that the U.S. had voted against Iran – “it was a private vote” – Price was asked if the U.S. views it as “appropriate” for Iran to be on the CSW.

He repeated the point about it being “a troubling feature when countries run unopposed.”

“Well I’m talking about Iran specifically,” Associated Press reporter Matt Lee pressed. “Do you guys have an issue with them being on this commission?”

“In this case, I think that Iran would qualify for much of what I just said: countries that have very troubling records, deeply disturbing records,” he said.

“So is it safe to say – would someone be wrong in writing that the U.S. thinks it’s a bad idea for Iran to be on this commission?” Lee asked.

“With a commission like this, we think that members should reflect the values underlying the commission,” Price responded.

“And Iran doesn’t,” Lee concluded, to which Price appeared to give a small nod.

The remarks read out by Price were provided as a written statement to the VOA’s Persian service, with the added line, “We continue tocall on regional groups to put forward candidates with strong human rights records for these U.N. bodies.”

Commenting on the department’s stance, Hillel Neuer, executive director of the non-governmental organization U.N. Watch, said not only did it not directly condemn Iran’s election, it also did not reference the fact the U.S. had not encouraged additional countries from Iran’s regional group to put forward candidacies, thereby offering some competition.

Neuer said the statement implied that there was nothing the U.S. could do. But he recalled that when Iran in 2010 stood for a seat on another U.S. body with a gender focus, U.N. Women, the Obama administration had urged East Timor to submit its candidacy late in the process, turning what had been an uncompetitive “clean slate” into a contest. Iran was duly outvoted.

In 2014, when Iran was handed a seat on CSW in another uncontested “election,” Obama’s ambassador to the U.N. Samantha Power in a tweet called the move “an outrage.” Neuer contrasted that with Price’s remarks.

(As reported at the time, however, the U.S. on that occasion offered no objection to handing the seat to Iran “by acclamation,” and had not called for a recorded vote.)

Who voted for Iran?

Price’s press briefing came a day after President Biden, in his speech to a joint session of Congress, declared that “America will not back away from our commitments – our commitment to human rights and fundamental freedoms.”

On Sunday, retweeting those lines from Biden, Secretary of State Antony Blinken added, “We will always defend human rights at home and abroad.”

Of ECOSOC’s 54 members, at least 22 could be described as free democracies. Assuming all ten of the countries that withheld their votes from Iran were democracies, that would mean at least 12 democracies, behind the veil of a secret ballot, voted for Iran to join the women’s empowerment body.

On Monday, U.N. Watch will convene a briefing with leading human rights activists from Iran, who will call for Iran’s election onto the CSW to be overturned. Given the fact that some democracies on ECOSOC evidently voted for Iran, the panelists plan also to challenge democracies to make public how they voted.