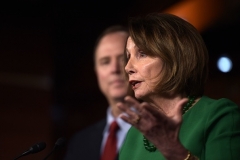 (CNSNews.com) – House Speaker Nancy Pelosi on Sunday accused the intelligence community of improperly equating Russian and Chinese attempts to interfere in the U.S. elections. While she agreed that Russia is meddling in support of President Trump, Pelosi questioned the notion that China was doing so in support of Joe Biden.

“For some reason, they have tried to have some equivalence” between the threats posed to the election by different actors, Pelosi said of the intelligence community’s statement Friday highlighting malign efforts by Russia, China and Iran.

“They’re not equivalent,” Pelosi said on CNN’s “State of the Union.”

The National Counterintelligence and Security Center (NCSC) – a division in the Office of the Director of National Intelligence – said China and Iran would both like to see Trump defeated, while Russia was opposed to a Biden victory.

NCSC director William Evanina described the assessments as “the most current, accurate, and objective election threat information the IC [intelligence community] has to offer in an unclassified setting at this time.”

But Pelosi and House Intelligence Committee Chairman Adam Schiff (D-Calif.), while expressing satisfaction about the NCSC assessment about Russia backing Trump, were skeptical about the claims relating to China and Iran opposing Trump.

In a joint statement Friday, they complained that the NCSC assessment “treats three actors of differing intent and capability as equal threats to our democratic elections.”

Pelosi and Schiff said the IC must provide the American people “with specific information that would allow voters to appraise for themselves the respective threats posed by these foreign actors, and distinguish these actors’ different and unequal aims, current actions, and capabilities.”

She contrasted that with Russia, which she said “is actively, 24/7, interfering in our election. They did so in 2016, and they are doing so now.”

(Evidently wary of being accused of being soft on China, Pelosi pointed out that she is unpopular with the Chinese government.)

Pelosi also addressed the issue in an appearance on “Fox News Sunday.”

“They try to blanket it with – the Chinese, they said, prefer Biden. We don’t know that, but that’s what they’re saying,” she said of the IC. “But they [the Chinese] are not really getting involved in the presidential election.”

Pelosi said it was wrong for the intelligence community to equate the Russian and Chinese and Iranian activities.

“For them to give some equivalence is not right. It doesn’t really tell the story.”

However, National Security Advisor Robert O’Brien said Sunday that the Chinese would like Trump to lose, and “China, like Russia, like Iran, have engaged in cyber-attacks and phishing and that sort of thing with respect to our election infrastructure.”

“We’re aware of it and we’re – we’re taking steps to counter it,” he told CBS’ “Face the Nation.”

“Whether it’s China or Russia or Iran, we’re not going to put up with it. And there will be severe consequences with any country that attempts to interfere with our free and fair elections.”

“We’re Americans. We don’t – we’re not going to have foreign countries deciding who our next president is going to be. That’s outrageous.”

O’Brien said malign actors were “trying to access secretary of state websites and that sort of thing and – and collect data on Americans and – and engage in influence operations, whether it’s on TikTok or Twitter or in other spaces.”

“It’s not just Russia, Margaret. It’s the Chinese don’t want the president re-elected. He’s been tougher on China than any president in history.”

In his statement on Friday, Evanina said Russia was “using a range of measures” to denigrate Biden, “consistent with Moscow’s public criticism of him when he was Vice President for his role in the Obama Administration’s policies on Ukraine and its support for the anti-Putin opposition inside Russia.”

“We assess that China prefers that President Trump – whom Beijing sees as unpredictable – does not win re-election,” he said. “China has been expanding its influence efforts ahead of November 2020 to shape the policy environment in the United States, pressure political figures it views as opposed to China’s interests, and deflect and counter criticism of China.”

Evanina highlighted Beijing’s criticism of Trump’s statements and actions on China, relating to the coronavirus outbreak, Hong Kong, the closure of its consulate in Houston, surveillance via Chinese apps and disputes over the South China Sea and 5G.

On Iran, Evanina said the regime was trying to undermine Trump and U.S. democratic institutions, and divide the country ahead of the elections.

“Iran’s efforts along these lines probably will focus on online influence, such as spreading disinformation on social media and recirculating anti-U.S. content,” he said. “Tehran’s motivation to conduct such activities is, in part, driven by a perception that President Trump’s reelection would result in a continuation of U.S. pressure on Iran in an effort to foment regime change.”