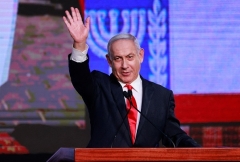 (CNSNews.com) – Despite palpable delight in some quarters about the imminent departure of Israeli Prime Minister Binyamin Netanyahu, marathon negotiations aimed at establishing a new government with him at its head may yet hit fresh hurdles, so precariously poised are the myriad parties and interests involved.

More than two months after a fourth inconclusive election in two years, an unlikely combination of right and left-wing parties, plus an Islamist Arab party, looks set to form Israel’s next government.

But until lawmakers vote their blessing on the unwieldly eight-party coalition, Netanyahu’s Likud could yet persuade disgruntled conservatives to vote “no,” depriving the so-called “change government” of its razor-thin majority – 61 seats in the 120-seat Knesset.

A Knesset plenary session must be held for the vote; the speaker, Yariv Levin, is a member of the Likud, prompting some fretting that he could slow-walk the process.

If the coalition does goes ahead, it will mean the departure of a prime minister who has been much admired and much reviled since first taking office more than two decades ago.

“Bye bye Bibi,” tweeted MSNBC host Joy Reid, a member of the leftist, activist U.S. media. “Can’t say it’s sad to see him go, given his treatment of Palestinians and his intrusion into U.S. politics.”

“Among all the other consequential dimensions, Netanyahu (like his buddy Trump) can’t evade accountability anymore,” tweeted Ben Rhodes on Wednesday night. The deputy national security adviser for strategic communications in the Obama administration was a leading salesman of the Iran nuclear deal, which Netanyahu firmly opposed.

Reid’s comment about “intrusion into U.S. politics” may refer to Netanyahu’s controversial 2015 address to Congress opposing the nuclear deal – an Obama foreign policy priority – to the anger of some Democrats. Rhodes’ point about accountability likely refers to Netanyahu’s trial on corruption charges.

Netanyahu served as prime minister from 1996-1999, then returned to the post in 2009. In July 2019 he passed David Ben Gurion to become Israel’s longest-serving prime minister.

His Likud Party won the most seats (30) in the March 23 election, but Netanyahu was unable to pull together a coalition within the required 28 days, leaving Rivlin to turn that task over to Lapid, whose Yesh Atid (“There is a Future”) party had taken the second-largest number of seats (17). 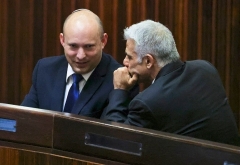 Naftali Bennett, left, and Yair Lapid in the Knesset in Jerusalem on Wednesday. The nationalist and centrist politicians look set to lead a new coalition government, taking turns as prime minister. (Photo by Ronen Zvulun/Pool/AFP via Getty Images)

Under the agreement finalized on Wednesday night, Lapid and nationalist leader Naftali Bennett will serve as prime minister on a rotation basis, with Bennett first to hold the post (while Lapid serves as foreign minister). For the first time, one of Israel’s Arab party has agreed to join a coalition government.

The smallest party in the Knesset since the March election, Ra’am (United Arab List) holds just four seats, but they are crucial to the Lapid-Bennett coalition’s slim majority. Although Islamist in outlook, Ra’am’s stated priorities focus on economic and development issues affecting Israel’s Arab minority.

With Labor and Meretz on the left, and Bennett’s Yamina (“Rightwards”), the Yisrael Beitenu party and New Hope on the right, the coalition will need to overcome or disregard deep ideological rifts if it is to hold.

Lapid in a tweet expressed optimism, saying the envisaged new government “will work for all the citizens of Israel, those that voted for it and those that didn’t. It will do everything to unite Israeli society.”

The next government will face challenges ranging from threat posed by Iran and the terrorists it sponsors in Gaza and Lebanon, to overcoming the impact to the economy of the coronavirus pandemic.

Like previous U.S. administrations, the Biden administration has expressed its firm support for Israel, including during the recent 11-day war between the Israel Defense Forces and rocket-firing terrorists in Gaza.

But in contrast to its immediate predecessor it has signaled a shift in its dealings with the Palestinian leadership.

Netanyahu worked closely with Trump administration officials, including President Trump’s son-in-law and senior advisor Jared Kushner, in reaching normalization agreements with four Arab nations, putting to one side for the meantime the Palestinian issue (after its leaders had contemptuously dismissed Trump’s “vision for peace” between Israel and the Palestinians.)

Although the Biden administration welcomed the normalization accords, its approach to the Mideast involves moving the Palestinian question back to center stage.

It is also seeking a way back into the Obama-era Iran nuclear deal which President Trump abandoned three years ago.

The new coalition’s leaders oppose the Iran deal, although will do so in a less outspoken way than Netanyahu has.

Defense Minister Benny Gantz, whose center-left Blue and White party is one of the eight billed to enter the new coalition, will visit Washington on Thursday, reportedly to request assistance to replenish the Iron Dome.

The defense system was credited for preventing 90 percent of the rockets fired from Gaza last month – of those that did not fall short inside the Hamas-ruled enclave – from striking targets inside Israel.

Meanwhile the Knesset on Tuesday elected Isaac Herzog to succeed Rivlin when his seven-year term in the largely ceremonial post ends next month.

Herzog is the son of the late Chaim Herzog, a leading Zionist who was Israel’s president from 1983-1993, and earlier served as ambassador to the United Nations.