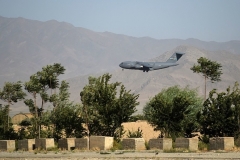 A U.S. Air Force transport plane lands at the Bagram airbase on Thursday, hours before what had been the biggest U.S. military base in Afghanistan over the past 20 years was vacated. (Photo by Wakil Kohsar/AFP via Getty Images)

(CNSNews.com) – President Biden is going to “own” the negative consequences of a poorly-planned withdrawal of all U.S. forces from Afghanistan, House Foreign Affairs Committee ranking member Rep. Michael McCaul (R-Texas) charged on Sunday.

“When we fully withdraw, the devastation and -- and the killings, and women, humanitarian crisis, fleeing across the border into Pakistan – President Biden’s going to own these ugly images,” he told “Fox News Sunday.”

Biden has ordered the pullout of all forces from Afghanistan before the September 11 anniversary of al-Qaeda’s terrorist attack on American in 2001, but the withdrawal is moving ahead of schedule. The Pentagon said Friday it was aiming to complete the process by the end of August.

Press reports say looters ransacked the base before Afghan security forces moved in and restored control.

The Taliban continues to seize control of districts in various parts of the country, more than 30 in the past few days alone. They include 24 districts in Badakhshan province in the far north-east, where according to Afghanistan’s Tolo news agency hundreds of Afghan security force members fled across the border into neighboring Tajikistan as the Taliban advanced.

(When the Taliban controlled most of Afghanistan in the second half of the 1990s, Badakhshan held out against the rule of the fundamentalist regime. It was a stronghold of the Northern Alliance, which allied with the U.S. in the invasion of Afghanistan after the Taliban regime refused to surrender its al-Qaeda allies after 9/11.)

A recent U.S. intelligence assessment warned the government in Kabul could fall to the Taliban within six months of the U.S. departure.  Some Taliban officials are even more optimistic.

“When you look at the IC assessment, meaning the intelligence community assessment, some reporting that within six months the Taliban could completely take over the country, including Bagram airbase. It’s quite frightening,” McCaul said.

“And they have gone on quite an offensive right now in the more rural areas, and they’re poised to take over provincial capitals once our troops are finally out of there, looks like within a month we’ll be completely withdrawn.”

“My criticism – we can debate how long to stay there, but my criticism is the lack of planning and preparation for this.”

Noting expressions of concern from the intelligence community and senior military officers, McCaul said “nobody thought this was a good idea” to pull out all of troops in the country.

“A residual force of 2,500 troops is not a whole lot of a footprint compared to where we have troops elsewhere to provide stability in the region.”

McCaul said he believed Biden was moving ahead with a total withdrawal for political reasons, and said he and “all the top experts I’ve talked to” worry that the U.S. may be forced to send troops back into Afghanistan in the future – as occurred less than three years after the Obama-Biden administration pulled all of the troops out of Iraq at the end of 2011.

“He may be doing this for political purposes, but at some point – our vital interests are ISIS and al-Qaeda and we are going to give them a safe haven as the Taliban takes over that nation. And that vacuum is going to be filled by terrorists. And I – I’ve – I’m concerned that we will be going back.”

Pentagon press secretary John Kirby said Friday that with the handover of Bagram, the main focus of the remaining U.S. presence was “in and around Kabul.”

The “new arrangement” will include the setting up of “U.S. Forces Afghanistan Forward,” based in Kabul and led by Navy Rear Admiral Peter Vasely.

“Over the course of the coming period,” he said, that presence would be focused on protecting U.S. diplomats and the Kabul airport, providing advice and assistance to Afghan forces, and “supporting our counter-terrorism efforts.”

A separate entity, “Defense Security Management Office Afghanistan,” will be based in Qatar and led by U.S. Army Brig. Gen. Curtis Buzzard, to administer funding support for the Afghan forces and “over-the-horizon” aircraft maintenance support.

As for future counter-terror options, Kirby declined to “get into rules of engagement” but reiterated that the U.S. military will “retain over-the-horizon counterterrorism capabilities” and the ability to counter “any threats emanating from Afghanistan to our homeland.”