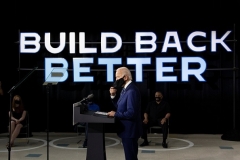 (CNSNews.com) – The Trump campaign last fall accused Democrat presidential nominee Joe Biden of plagiarizing British Prime Minister Boris Johnson’s “build back better” slogan in the context of the coronavirus pandemic, but Johnson conceded on Sunday that he had himself “nicked it from someone else.”

Johnson brought up the slogan during an interview with Margaret Brennan on CBS’ “Face the Nation,” saying he hoped to see Britain and the U.S. “working together to learn the lessons from the – the pandemic, and to build back better together.”

“I’m thrilled that President Biden has also got a slogan, ‘Build Back Better,’” he said. “I think – I think I claim that we used it first. And to be truthful, I think we – we nicked it from someone else before I started using it.”

“But it’s the right slogan, Margaret,” he continued. “We’ve got to learn from this pandemic”

The phrase has in fact been used in the disaster relief sector for years, and even in connection with the COVID-19 crisis, neither Trump nor Johnson was first to do so.

In a media database search, the first usage found in a quote dates back more than three decades, when the Miami Herald in April 1990 quoted the head of a tourism association in the U.S. Virgin Islands saying, in reference to Hurricane Hugo: “The up side of Hugo is that when you build back, you build back better.”

During the Clinton administration, then-Housing and Urban Development Secretary – now governor of New York – Andrew Cuomo used the expression in 1998 when speaking about the response to flash flooding in San Antonio, Texas: “Let’s build back, but let’s build back better.”

“The ‘build back better’ vision came to prominence in disaster thinking after the 2004 Indian Ocean tsunami, and is now regularly invoked in policy and programming,” the British think tank Overseas Development Institute said in a 2018 briefing note.

Soon after the coronavirus that emerged in Wuhan began sweeping the globe early last year, multilateralists began to use the term:

--On March 18, World Resources Institute CEO Andrew Steer: “Crises can bring people together or push them apart. They can lead to cynicism and a loss of faith in institutions, or to a deeper understanding of risk and determination to build back better.”

--On April 7, International Labour Organization Director-General Guy Ryder: “We must aim to build back better so that our new systems are safer, fairer and more sustainable than those that allowed this crisis to happen.”

--On April 22, U.N. secretary-general Antonio Guterres: “We will need to ‘build back better’ and maintain the momentum of international cooperation.”

Possibly the first public use by politicians in the U.S. relating to the pandemic was on April 19, 2020 when Cuomo said during a briefing in New York: “When we talk about rebuilding, we have to talk about not just rebuilding, but let’s learn from this horrific experience. Let’s take these lessons forward and how do we build back better than before?”

Johnson was first quoted as using the term publicly on May 28, when he told a U.N. financing event:  “[O]nce we move beyond the emergency phase, we owe it to future generations to build back better and base our recovery on solid foundations, including a fairer, greener and more resilient global economy.”

Last October the Trump campaign posted a video clip juxtaposing Johnson’s use of the phrase with Biden’s.

“If you thought Joe Biden’s clunky, tax-and-spend slogan ‘Build Back Better’ sounds like unoriginal, political consultant-speak, you’re right,” it said. “In fact, U.K. Prime Minister Boris Johnson is using the same slogan and was doing so before Joe Biden stole it.”