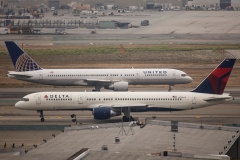 Boeing 757s taxi past each other at Los Angeles International Airport. Coronavirus-related restrictions have seen passenger numbers drop ‘to a level not seen since before the dawn of the jet age.’ (File photo by John Gress/Corbis via Getty Images)

(CNSNews.com) – President Trump issued a proclamation on Monday night lifting the entry ban on foreign visitors who were recently in Britain, Brazil, or dozens of Europe countries.

As of January 26, all U.S.-bound travelers must have a negative COVID-19 test before boarding their flight.

But the incoming Biden administration quickly signaled that it will not follow through on the order easing travel restrictions.

U.S. air carriers badly hit by the coronavirus pandemic have been calling for the travel restrictions to be replaced by standard testing requirements. The Centers for Disease Control and Prevention (CDC) issued an order a week ago directing that all travelers would from January 26 have to show proof of a negative test, or documentation of recovery, before flying to the U.S. from any foreign country.

Building on that move, Trump’s proclamation sought to end the restrictions on foreigners entering the U.S. from Britain, Ireland, Brazil, and the 26 members of the European visa-free travel area known as the Schengen zone, a step that would have been a boon for the airlines.

But shortly after the proclamation was announced, Jen Psaki, who will serve as White House press secretary in the incoming administration, said on Twitter, “On the advice of our medical team, the Administration does not intend to lift these restrictions on 1/26.

“In fact, we plan to strengthen public health measures around international travel in order to further mitigate the spread of COVID-19. With the pandemic worsening, and more contagious variants emerging around the world, this is not the time to be lifting restrictions on international travel.”

Psaki did not refer to the earlier CDC order mandating pre-flight negative COVID-19 tests for all U.S.-bound travelers.

In his proclamation, Trump said that although he was lifting the restrictions applicable to Brazil and the European countries, he was not doing the same in the case of China and Iran.

He said that while Health and Human Services Secretary Alex Azar expects authorities in the former countries to cooperate in carrying out the testing requirement – as their officials “have a proven record of working with the United States to share accurate and timely COVID-19 testing and trend data” – the situation was starkly different in the cases of China and Iran.

Government and state-owned enterprises in China and Iran, Trump said, “repeatedly have failed to cooperate with the United States public health authorities and to share timely, accurate information about the spread of the virus.”

Trump said he was therefore acting on Azar’s advice to remove the restrictions applicable to Brazil and the European countries, but to keep in place those applying to China and Iran.

“I agree with the Secretary that this action is the best way to continue protecting Americans from COVID-19 while enabling travel to resume safely.”

According to Airlines for America, an industry group of ten carriers including Delta, United and American Airlines, coronavirus-related restrictions saw volumes drop, from a record 2.5 million passengers a day before the pandemic, by 96 percent, “to a level not seen since before the dawn of the jet age.”

“Carriers have been forced to cut flights and currently are burning $180 million in cash every day just to stay in operation,” it says. “The rapid spread of COVID-19 along with government and business-imposed restrictions on air travel continue to have an unprecedented and debilitating impact on the U.S. airlines, their employees and the traveling and shipping public.”

Trump first moved to limit travel from China in late January, after the World Health Organization declared the outbreak that emerged in Wuhan late the previous year to be a public health emergency of international concern. With effect from February 2, any non-U.S. national who had visited China in the previous 14 days was to be denied entry into the United States.

The Iran restrictions were put in place in February, those applying to the European countries in mid-March, and the entry ban on travelers from Brazil in May.

The CDC order issued on January 12 requires all travelers – including U.S. citizens – flying to or transiting through the U.S. from international destinations, effective on January 26, to provide proof of either a negative COVID-19 test or documentation of recovery from COVID-19.

The viral test will have had to be taken within three calendar days of departure, and airlines must deny boarding to any passenger not complying.

Upon arrival in the U.S., travelers are advised further to take another test within 3-5 days, and to stay home for seven days post-travel.