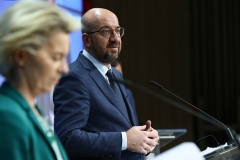 Berlin (CNSNews.com) – In one of its most significant responses yet to Russia’s invasion of Ukraine, the European Union has agreed to ban 90 percent of imports of seaborne Russian oil.

For the remaining ten percent of the oil imports, E.U. leaders made a temporary concession to accommodate Hungary, the Czech Republic, and Slovakia, all of which opposed an outright ban.

According to European Council president Charles Michel, three-quarters of Russian oil imports will be immediately affected by the decision, rising to 90 precent by the end of the year.

He said the package also included the “de-SWIFTing” of Sberbank, Russia’s largest bank, a ban on three more Russian state-owned broadcasters, and sanctions against “individuals responsible for war crimes in Ukraine.”

“We want to stop Russia’s war machine and cut the financing of Russia’s military capacity, by implementing sanctions that will put pressure on the Kremlin,” Michel said in Brussels.

A key concession under the E.U. agreement exempts the southern segment of the Druzhba pipeline, which carries oil to Hungary, Slovakia and Czech Republic. (The northern segment serves Poland and Germany, and is affected by the ban.)

Over recent weeks opposition from the three Central European countries, landlocked and highly dependent on Russian supplies, held up efforts by the bloc to target the oil.

Ahead of this week’s E.U. summit, German Economy Minister Robert Habeck had warned that E.U. unity was “starting to crumble.”

After sometimes tense negotiations, consensus was reached late on Monday night, however.

“Cracks in the European response have appeared to grow more pronounced in recent weeks as highly dependent importers, such as Hungary, refused to budge in their opposition to the oil embargo,” she said. 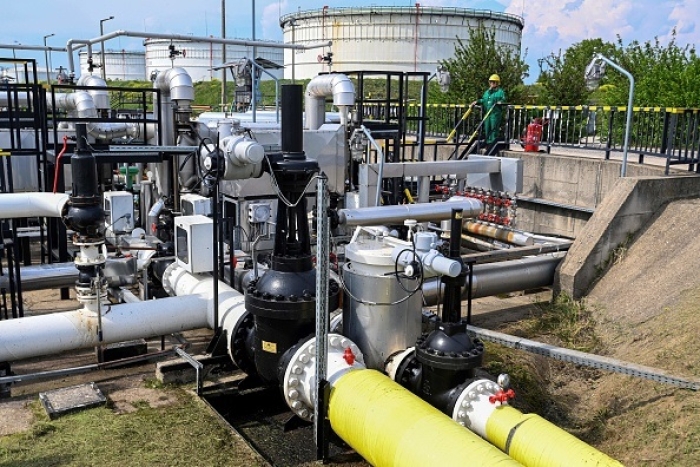 A receiving station along the Druzhba pipeline carrying Russian oil, outside Budapest, Hungary. (Photo by Attila Kisbenedek/AFP via Getty Images)

Hungarian Prime Minister Viktor Orbán hailed the concession as a victory for his country, saying in a Facebook post that the prospect of having to run the Hungarian economy with more expensive – non-Russian – oil “would have been like a nuclear bomb.”

However, European Commission President Ursula von der Leyen in a statement Tuesday reiterated that the concession was a temporary one, saying leaders would have to “soon return” to deal with the remaining ten precent of Russian oil imports.

The Kremlin has yet to react officially to the E.U. decision, but Mikhail Ulyanov, Russia’s permanent representative to international organizations in Vienna, responded dismissively, tweeting that Russia would find other customers for its oil.

Popkostova, who is also president of the European Center for Energy and Geopolitical Analysts, said as the embargo would only take full effect by the end of the year, its impact would likely only start being felt in the last quarter of 2022 or first quarter of 2023.

One critical element of the partial embargo that has not received as much attention, she said, is a shipping insurance ban.

“Without shipping insurance, it will be close to impossible to trade Russian oil and international trading houses will not take the risk either,” she said. “Self-sanctioning is already having considerable impacts and will magnify in the next few weeks.”

Popkostova predicted that global crude prices will likely continue to rise, given the lack of spare capacity globally.

“Refining throughput levels have been severely curtailed in recent years due to a composite of factors – COVID-induced shutdowns, signals on a net-zero trajectory, Chinese inclusion of refineries in their emissions' reduction targets, and imposed export controls,” she said.

“As we enter holiday season, prices at the pump will edge even further up.”