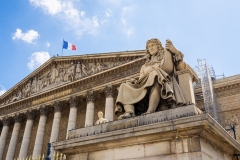 The statue of Jean-Baptiste Colbert, alongside the French National Assembly in Paris. (Photo by Edward Berthelot/Getty Images)

Paris (CNSNews.com) –  The targeting of historical figures accused of racism is stoking debate in France, where President Emmanuel Macron has spoken out against demands to take down statues or attempts to “erase” names from history.

On Tuesday, a statue of 17th century minister of state Jean-Baptiste Colbert which stands at the main entrance of the National Assembly in Paris was vandalized, spray-painted red and daubed with the words “State Negrophobia.” A suspect was arrested, but has not been named.

Colbert was the author of a collection of legal texts governing slavery in the French colonies during the reign of Louis XIV. In the wake of anti-racism sentiment sparked by the death in Minneapolis of George Floyd, activist groups here have been calling for the removal of statues and changing of streets names.

“This noble fight [against racism] is misguided when it turns into communitarianism, hateful or false rewriting of the past,” he said. “This fight is unacceptable when it is taken over by separatists.”

(“Communitarianism” refers to the phenomenon of migrant communities segregating themselves to such a degree that their successful integration into French society is hampered. Macron did not make clear what he meant by “separatists” but may have referred to those pushing for independence for overseas French territories, and concerns that the current debates could fuel their cause. )

“The Republic won’t erase any name from its history, will forget none of its artworks, and won’t take down statues,” Macron declared.

“We should look at our history together, including relations with Africa, with a goal of truth instead of denying who we are.”

Reacting to the damage to the Colbert statue, Richard Ferrand, a senior lawmaker in Macron’s Republic in Motion party criticized what he called “an attempt to change the history of France.”

“It is perhaps necessary for us to do a better job explaining the good and bad sides of each personality of our history,” he told reporters. “Perhaps there we have work to do to enlighten citizens.”

On both the far left and far right came opposition to taking down statues.

Communist Party national secretary Fabien Roussel said in a television interview he opposes removing statues, although he was in favor of “a contemporary reading of our history” and the need to explain what happened at certain times in French history.

Marine Le Pen, president of the far-right National Rally, said in response to calls to take down statues of controversial figures that there was “no way that we would re-write the history of our country.”

Calls to remove statues and change street names come at a time when protests against the actions of police during arrests of people of African descent are taking place across the country.

A number of statues have been daubed with red paint, including those honoring the philosopher and writer Voltaire, colonial administrator and army general Hubert Lyautey, and 19th century colonial governor Louis Faidherbe.

“Nobody looks at them, reads their inscriptions, or takes care of restoring them,” she said.

The Representative Council of Black Associations in France (CRAN) disagrees, noting that it has been calling since 2017 for the removal from public places of statues and monuments honoring historical figures linked to slavery and racism.

“We need heroes who bring us together, not people like Jean-Baptiste Colbert who divide us,” CRAN president Ghyslain Vedeux told franceinfo radio. “We must teach this history and put these statues in museums.”

There have also been calls from some quarters to rename streets named for certain figures.

In Bordeaux, a river port 360 miles south-west of Paris, a non-governmental organization called Memories and Sharing says it been campaigning for more than a decade for the renaming of streets there carrying slave traders’ names.

The NGO’s founder, Karfa Diallo, said 20 streets in the city were named for people active in the slave trade when Bordeaux was a major slave port.

Diallo said he does not favor pulling down statues, but thinks that there is a need to better explain to citizens exactly who the people were who are being honored.